Baker Mayfield is the 2017 Heisman Trophy winner. The Oklahoma quarterback was a heavy favorite entering the ceremony over the other finalists, Bryce Love and Lamar Jackson. Mayfield had the perfect combination of putting up amazing stats while playing quarterback for a championship contender.

“This is unbelievable for me,” Mayfield said as he began his speech. “Being up here among these greats. It’s something words can’t even describe. God has put me in a position, and I am so blessed. All the time, I wonder why, but it’s such an honor to be up here. I really appreciate it. It’s unbelievable.”

Mayfield interspersed some humor by thanking the Oklahoma strength staff, jokingly saying he wasn’t “the most physical specimen that you’d ever seen” when he arrived in Norman. He referred to himself as a “chubby, unathletic kid” when thanking former coach Bob Stoops for giving him a spot on the team.

Mayfield was one of the first Heisman winners to read off his phone rather than reading from a speech on paper. After thanking his offensive lineman, teammates, and defensive players for challenging him in practice, Mayfield began to get emotional as he turned his attention to Oklahoma coach Lincoln Riley and his family.

After Mayfield’s name was announced, he was greeted with a massive Boomer Sooner chant from past winner, Billy Sims. The Austin native reaffirmed his loyalties to Oklahoma towards the end of his speech.

“It’s been a dream come true to play at OU,” Mayfield said. “Although I grew up in Austin, Texas, I was always Sooner born and Sooner bred. And you know what they say, when I die I’ll be Sooner dead. I truly mean that. It’s been a dream for me.”

According to ESPN, Mayfield won with 86 percent of the votes, the third highest total in since 1950. Love finished a distant second in the voting. Mayfield threw for 4,340 yards, 41 touchdowns and five interceptions while completing 71 percent of his passes this season. Mayfield also rushed for 310 yards and five touchdowns. It was a step up for Mayfield, who finished third for the 2016 award.

Mayfield is known for playing with a lot of passion, and at times this season that passion has gotten Mayfield into trouble. At the beginning of the season, Mayfield planted an Oklahoma flag in the middle of the Ohio State field. Towards the end of the season, Mayfield was caught on camera grabbing his crotch while yelling obscenities at a Kansas defensive player. While it may have cost him a few votes, it was not enough to cost him the trophy as his wide margin of victory shows. 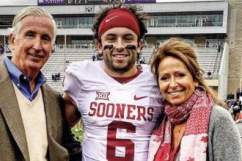