S/O to James and Gina for making it to the Little Apple for a good team win. On to the next one!

Baker Mayfield has overcome a lot of obstacles to put him in a position to be the favorite to win the Heisman Trophy. Baker’s family has been with him every step of the way. Baker started his career at Texas Tech, but transferred to Oklahoma to attempt to walk-on to the team, despite the Sooners having a capable quarterback in Trevor Knight.

Baker was able to make the team, and eventually beat out the group of Oklahoma quarterbacks for the starting gig. He grew up in Austin, Texas and played for Lake Travis High School. Despite being right down the road from the University of Texas, Baker was not recruited by the Longhorns. It is just one of the many reasons he has a chip on his shoulder, something that runs in the family.

The extra motivation along with his self-assurance is something Baker gets from his father, James Mayfield. In a Bleacher Report interview, James recounted what he told Texas after the school repeatedly told him the team had enough quarterbacks, and did not have room for his son.

I said, ‘Tell [Texas coach] Mack [Brown] he has five scholarship players that couldn’t play for Lake Travis. As it turned out, I was right. All five of those guys crashed and burned.

While not as brash, Baker’s mother, Gina Mayfield, has also been with Baker through all the ups and downs, including a late-night arrest in Fayetteville, Arkansas. Gina does not always vouch for her son’s decisions, but has been as supportive as possible through it all.

Get to know the Mayfield family behind one of the best quarterbacks in college football.

1. Baker Admitted the Conversation With His Parents After His Arrest Was the Hardest Part of the Incident

Family is everything, so thankful for these two. Wouldn't be here without them…. Literally.

While visiting friends with his girlfriend Morgan Mayberry in Fayetteville, Baker was arrested February 24 after fleeing from police. Police stopped Baker to ask him to be a witness for an incident, and an intoxicated Mayfield became belligerent with the officers. Mayfield refused and eventually tried to run away from the police.

Baker has since apologized for the incident, but admits the most difficult conversation he had was with his parents. Baker detailed what was discussed in an interview with ESPN.

Mom and Dad, by far the hardest [conversation]. It was a rough one you know because that’s the first people you think about letting them down … first thing I said was, ‘I’m sorry.’ And so, that was hard to even get those words out of my mouth. 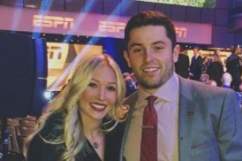 According to The Oklahoman, Gina was in a serious car accident in April 2015 while on her way to meet her sister and friends for a trip. Three people were killed in the accident, and Gina along with her sister were seriously injured.

The Oklahoman described the accident in detail.

A Lincoln Town Car had crossed the median — including a barrier cable meant to prevent cross-over collisions — and hit another car before colliding with the Toyota RAV4 driven by family friend Adrienne Davis. Gina Mayfield and her sister, Kristi Brooks, were in the backseat.

The RAV4 was forced off the right side of the highway and flipped. The Lincoln hit a truck before finally coming to a stop. Davis’ injuries were initially thought to be lesser than Gina or Kristi, but a few days later, she developed a fatal blood clot.

Thanks to recently passed NCAA rules, Oklahoma was able to fly Baker out of Norman to visit his family. Gina has since recovered from the accident, but the family endured a few scary months as it was not clear how serious Gina’s injuries were.

This picture only took 30 tries. #Leo #Mowgli Leo knows the curls are so in right now.

Whether it was after his arrest or the crotch grab incident during the Kansas game, Baker’s brother Matt has looked out for his brother, and been there to help Baker through the difficult times, even if some of them were self-inflicted wounds.

Gina explained to Tulsa World that Baker’s success has been helped by following in his older brother’s footsteps.

Baker always wanted to be like Matt. Matt was fast and his big brother is who he idolized. He worked hard. He’d hang around with Matt’s friends even though there was a five-year difference.

You know you don’t think about it when it’s happening, but in hindsight that’s probably where some of his drive to do better came from.

Happy Fathers Day to the man, the myth, and the legend James. You have shown me how to be a man and put my family first. And also a Happy Anniversary to you and Mom. I'm glad y'all took this picture when she finally became legal.

As a walk-on at Oklahoma, one of the most interesting parts of Baker’s makeup is the chip on a shoulder Baker plays with. At times, his eagerness to call out other Big 12 schools for not offering him a scholarship has rubbed people the wrong way. After Baker called out TCU for not recruiting him, TCU head coach Gary Patterson had some pointed things to say about Baker’s father, James, in an interview with college football reporter Bonnie Bernstein.

If Baker Mayfield wants to blame TCU for 128 BCS schools not offering him a scholarship, that’s fine. But ask Kliff Kingsbury why he didn’t offer him a scholarship at Texas Tech. Ask about Baker’s dad [James]. He’s an arrogant guy who thinks he knows everything. If people knew the whole story, they might not have a great opinion of Baker or his father.

Baker once played for Texas Tech, but opted to transfer to Oklahoma after he was not seeing the field.

5. As a Kid, Baker Transitioned the Family From Watching Saturday Morning Cartoons to ESPN

A very special birthday to the dingus on the right. 27 is getting up there old man, maybe I'll have to start taking it easy on you in ping pong. #NoMoreWrestling

Like many kids, Baker grew up watching Saturday morning cartoons. One day Baker had an epiphany, one that would impact his family’s Saturday morning ritual. According to Tulsa World, Baker and his dad would watch SpongeBob SquarePants, until Baker turned his attention to sports.

Baker is sitting in our TV chair one Saturday morning and comes into the kitchen and said ‘I’m going to watch ESPN from now on.’ He started doing that and that’s where he learned his baseball stance. He kind of taught himself. We were not a baseball family. In the house, he always had a ball in his hand. 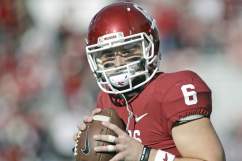