Though they lost just three times during the regular season, the Pittsburgh Steelers will get a chance to avenge one of those defeats on Sunday afternoon, as they take on the Jacksonville Jaguars for a spot in the AFC championship.

Kickoff is scheduled for 1:05 p.m. ET and will be broadcast nationally on CBS. If you don’t have cable or can’t get to a TV, you can watch a live stream of CBS on your computer or on another streaming device by signing up for one of the following cable-free, live-TV streaming services. They cost a monthly fee but all come with a free trial, so you can watch today’s game at no cost:

CBS All Access: This service lets you watch a live stream of your local CBS channel (most markets included) for $5.99 per month. You can sign up for a free 7-day trial right here, and you can watch on your computer via the CBS website, or on your tablet or streaming device via the CBS app.

FuboTV: CBS (live in at least 20 markets) is included in the “Fubo Premier” channel package, which gives you access to 70-plus channels and costs $19.99 per month for the first two months and $39.99 per month after that. It also comes with a free 7-day trial, and you can watch on your computer via the Fubo website, or on your tablet or streaming device via the FuboTV app.

The Steelers are favored by 7.5 points on Sunday afternoon, but that was also the spread when these teams met at Heinz Field back on October 8, and that one finished with a 30-9 Jaguars victory. It was the Jags defense that dominated in that one, as the Steelers committed a season-high five turnovers and were held to a season-low in points.

That said, that came at a time when Pittsburgh’s offense as a whole was playing at a somewhat inconsistent level. They’ve recovered since, and they enter this one as one of the hottest teams in football. Since Week 11, they’ve put up five of their six highest point totals of the season, averaging 31.2 points and 403 yards per game in the process. Moreover, their starters have had two full weeks of rest after sitting in Week 17 and then receiving a bye in the wild-card round, plus stud wide receiver Antonio Brown is expected to be back at full strength.

This matchup is the definition of unstoppable force meets immovable object, and it’s going to be a joy to watch.

Where this game may be decided, though, is on the other side of the ball. Pittsburgh was the only team to finish above Jacksonville in sacks (56 to 55) and sack percentage (10.1 to 9.8), and they weren’t far behind in Football Outsiders’ advanced metrics, finishing ninth in the league on that side of the ball. Blake Bortles, meanwhile, had some good games down the stretch, but he looked putrid last weekend against Buffalo, and he has been anemic on the road this year, throwing for 193.0 yards per game with a 6:8 TD:INT ratio.

Jacksonville will have some hope if it finds success on the ground, but if this one comes down to a red-hot Ben Roethlisberger vs. an ice-cold Blake Bortles, then you can see why the Steelers are significant favorites, even knowing what happened back in Week 5.

Still, it’s a tantalizing overall matchup and should serve as one of the best games of the weekend. 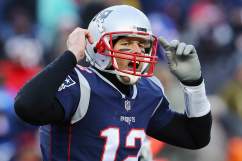