Pair figure skater Alexa Scimeca Knierim is representing the United States alongside her husband, Chris Knierim in PyeongChang. It’s a dream come true for the 26-year-old, especially considering that less than two years ago, she was facing a rare and potentially deadly gastrointestinal condition.

“This competition’s very meaningful for us,” Knierim told People. “We’ve kind of been lacking the joy and lightheartedness of life for about two years now, from all the struggles we’ve been through, so being here together, Chris and I are kind of just enjoying it.”

The couple competed Sunday afternoon in team figure skating, in Gangneung, South Korea, where they placed fourth in their free skate. Their scores in the short program and free skate helped the United States capture bronze in the figure skating team event.

Here’s more on Alexa’s illness and how she overcame it to compete in the Olympics:

1. Alexa Became Sick in April 2016 During Their Last Competition of the Season

"The best moments don't always come with applause, a soundtrack, or a judge's score."❤️❤️❤️ #onthemend

Alexa became sick in April 2016 during their final competition in the 2015-16 season. Alexa started vomiting for hours without a clear cause. From then on, Alexa experienced bouts of sickness. Even the night before their June 2016 wedding, Alexa had vomiting “episodes.”

“There was no way to describe or call what I was going through when I was getting sick,” she told NBC Sports. “We just kept calling them episodes.”

Her illness interrupted the Knierims’ training throughout the summer months that followed. Alexa had episodes of vomiting, typically lasting 10 to 12 hours, every few days. She was properly diagnosed with a rare, life-threatening gastrointestinal condition in August and underwent two abdominal surgeries that month. The illness, which Alexa refers to as “a series of binding internal issues” caused her to lose 20 pounds and required three surgeries.

According to NBC, it took at least 10 doctors and many emergency-room visits before she was properly diagnosed. For months, Alexa battled through regular episodes of vomiting, debilitating pain, difficulties with sleeping, and eating. As a result, she only weighed 80 lbs. and lost much of her muscle mass. When she returned to the ice for the first time, she lacked strength and had to essentially re-train her body.

Chris Knierim stated that when his wife initially returned to the ice following surgery, she had to hold his hands just to skate around in circles and could only skate for 10 minutes before having to go home for a nap because it was so physically draining.

Alexa added, “I’ll never forget how hard we had to work to get back to where we are now.”

3. Alexa Said Her Faith Pulled Her Through

"My recovery must come first so that everything I love in life does not have to come last." I'm so grateful for my team that has helped me progress so rapidly! @heatherlinden's magical hands have been keeping me healthy and happy! #bellyrubs

Alexa has often discussed the key role their Christian faith has played in their lives, especially during her sickness.

“As that summer continued and as my body was at it weakest, my faith was at its strongest,” Alexa said. “A time passed as I approached the autumn season, I started to have more faith in myself and my journey, although physically I didn’t think I’d be in the position I am today, my faith really propelled me forward.”

Alexa and Chris meet regularly with other Christian athletes in Colorado, and have a group prayer before each of their competitions.

“It’s the reason I was able to get back on the ice,” Alexa told People, “because I stopped worrying and stopped trying to control life, because I couldn’t. In the moment, you know, I was so sick and didn’t really know where things were going to go for me, whether it was skating or life in general. So I finally just threw my hands up and said like, ‘You lead the way,’ and it’s my testimony and I stay true to it.”

“And even here at the Games, it’s no longer about me,” she continued. “I have fans out there who know that I am a true believer in the Lord and I’m trying my best to shine his light and let people know that it’s okay to promote him and do things for him, because in the Christian life that’s kind of what we’re supposed to.”

4. The Knierim’s Coach, Dalilah Sappenfield Accompanied Them on Nearly Every Doctor’s Appointment

GettyAlexa Scimeca-Knierim and Christopher Knierim celebrate in the kiss and cry with their coaches Eddie Shipstad and Dalilah Sappenfield after the Pairs Free Skate during the 2018 Prudential U.S. Figure Skating Championships.

The Knierim’s coach, Dalilah Sappenfield, who officiated their wedding, accompanied the couple on nearly every doctor’s appointment and sat in the surgery waiting room with Knierim.

“The toughest part [for Scimeca Knierim] was not physical, but mental,” Sappenfield told NBC. “Between the uncertainty surrounding treatment and the self-doubt growing within Alexa, the mental — and with that, the emotional — toll was substantial. To her credit though, Alexa has unbelievable faith and spiritual strength, along with a loving, supportive husband in Chris. She might have been dealing with an illness, but she certainly never faced it alone. From my standpoint, I became less a coach and more a counselor. … you coach the athlete, but you care for the person.”

During Alexa’s illness, Sappenfield became an extension of the Knierem’s family.

“[Sappenfield] became like a second mother to me when I was sick because I am away from home,” Alexa told NBC. “I’m in Colorado. My family’s in Illinois. Chris’s mom’s in Arizona. I didn’t have the family support that I needed when I was sick, going through all this turmoil and illness.

“Dalilah really stepped up and took me on like a daughter. She did not care about skating any more. She just wanted me to be healthy again. When you go through such a traumatic experience and they’re in the room with you the whole time, you create a bond that is unbreakable. Our journey goes so much further than the skating journey could take us.”

5. Alexa Has a Scar From the Surgeries

Those who can find beauty in their imperfections are the ones who can't be stopped! ????? #IWontGiveUp #Warrior #ScarsAreBeautiful #stomachscar #scar #abdominalsurgery

Although Alexa is fully healthy, she still has a physical reminder of those difficult months — a scar several inches long that runs through her belly button.

“At the very beginning, when I had just gotten out of surgery and it was like bloody, and I had all the wraps on it, I was thinking, I’ll never look good in a two-piece swimsuit, or if I wear a crop top, everyone will stare at me,” Alexa said. “But once it healed, it closed up, and I started to get on my feet again, it is something that I’m truly proud of, and I do love it. I’m kind of sad because it’s healing so well, pretty soon you might not be able to see it.

“It’s like a gold medal to me, for my stomach.”

She has posted Instagram photos with the scar exposed. 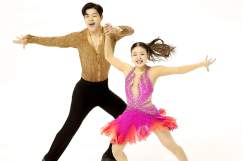