The armchair judges on social media are upset that 15-year-old Russian upstart Alina Zagitova edged out fellow Russian Evgenia Medvedeva to win a gold medal in figure skating at the Winter Olympics in PyeongChang.

The general rap on Alina is that she is an athlete, whereas Evgenia is an artist. This is simplistic as Zagitova has a stunning balletic artistry all her own, and Evgenia can execute jumps like almost no other. However, the two skaters have distinct styles in some ways, with the somewhat older Medvedeva, 18, giving a deeply soulful performance as Anna Karenina after battling back from injury.

In the end, the scores were very close. Zagitova scored 239.57 points to take the gold. Medvedeva earned 238.26, taking the silver medal. Kaetlyn Osmond of Canada won the bronze medal, but the real battle was between the two Russians, who are friends off the ice and share the same coach. What gave Alina the gold, though? Here are the scores for the free skate by judge:

The Short Program Put Zagitova Over the Top

Confused which skater performed better in the February 22 free skate? The judges were too. Zagitova and Medvedeva earned identical scores in the free skate, 156.65 points each. What gave Zagitova the gold? Her slightly better performance than her rival in the earlier short program.

.@JannyMedvedeva was stunning in the free skate, a performance that earned her silver. #WinterOlympics https://t.co/fmMl0BMYXF pic.twitter.com/mZFRNI25mO

Zagitova finished the short program with a score of 82.92 points, slightly higher than Medvedeva’s 81.61.

The scores were so strong and the rivalry so intense that Medvedeva broke the world record with her score, only to see Zagitova break it. That made the difference in the end.

What’s important to remember is that the judges see things in jumps that those less familiar with skating might miss. You might think that a person who bobbles a jump can’t score higher than a person who nails every one of them. That’s not necessarily true; it depends on the technical difficulty of the jumps. As Vox points out, a skater who falls on a much harder jump might earn more points than a skater who lands a less technically difficult one.

Neither Zagitova nor Medvedeva fell on the ice.  So, what was it about Zagitova’s short program that gave her the edge over Medvedeva in it? The technical difficulty of a jump.

It’s all in the scoring.

I'm too tired rn to analyze scores, complain about PCS (Miyahara was robbed, Zagitova overscored), and propose an overhaul of IJS.
But it's on my mind.#PyeongChang2018 #Olympics #FigureSkating

According to NBC, “Skaters receive two sets of marks for each program: the technical element score (TES) is based on the difficulty and execution of the technical elements, such as the jumps and spins, and the program component score (PCS) is based on artistry, interpretation and presentation. The TES and PCS are combined for a skater’s total score.”

Zagitova Stacks Her Jumps in the Second Half of the Performance

Because it’s so difficult to do and gets her more points, Alina Zagitova places her jumps in the second half of her performance. Under figure skating rules, this earned her a 10 percent bonus. Some people on Twitter are upset enough about this to insist that figure skating institute a “Zagitova Rule” banning this bonus for the next Olympics, but, in PyeongChang, those were the rules, and Alina played by them.

Some people feel that stacking jumps in the second half of a program harms the flow of the program and, thus, its artistry. Others feel it shows an athletic prowess that deserves to be rewarded. It brings us back to the age old debate of artistry versus athleticism.

"Once again Figure Skating chooses the jumper over the artist." CNN sports contributor @cbrennansports has her say on the decision to award Zagitova the gold medal over Medvedeva: https://t.co/xCExAMPV8t pic.twitter.com/GMLJHWfngI

On Twitter, many observers felt that Medvedeva deserved the gold medal.

Ice skating, for me your casual viewer, is about the story the athlet gives you, it makes you feel something, joy, sadness, anger, etc. And tbh I felt nothing with Zagitova's program, I'm really sad Medvedeva lost, because she told a beautiful story.

Is not Zagitova's fault, but of the judges and this unfair inflation

There’s no denying that Zagitova did an amazing job in her program, but Medvedeva, on top of also doing an amazing job, sold her program so well. She was so into it and felt the character and the story. For that, she definitely deserved the gold medal here

Probably one of the best free-skate events because of Medvedeva and Zagitova. Alina is good, no doubt there, but Yevgenia was transformational (as always). Medvedeva is pure Gold. #PyeongChang2018 #WinterGames2018 #figureskateing #Medvedeva

Some people disagreed, though.

All these people saying Medvedeva was robbed… when she's clearly not. Zagitova won fair and square. It's not illegal to backload the jumps, it's called Strategy. Medvedeva's PCS is undoubtedly higher, but Zagitova has both PCS AND TES, Medvedeva only got her Helicopter Tanos. pic.twitter.com/Gz06cDZ75i

Sooo my viewing was interrupted; I watched Medvedeva live and was WRECKED she didn’t win but then went back and watched Zagitova….and yeah, I get it now #Olympics2018 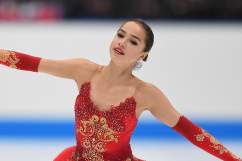