Getty Rodney Hood is one of several players headed to Cleveland at the NBA trade deadline.

The Cleveland Cavaliers will need name tags as they take the floor after the NBA trade deadline. The Cavs made three trades with hours left on the deadline to drastically alter their roster.

Here’s a rundown of what we know so far. ESPN’s Adrian Wojnarowski reported the Cavs acquired Jordan Clarkson and Larry Nance Jr. from the Lakers. Cleveland sent Isaiah Thomas, Channing Frye and a protected 2018 first round pick to Los Angeles. Shortly after this deal was completed, another three-team deal involving the Cavs, Kings and Jazz was announced. The Cavaliers acquired Rodney Hood and George Hill in the trade. Cleveland traded away Iman Shumpert, Jae Crowder and Derrick Rose. The Cavaliers also traded Dwyane Wade back to the Heat in a separate deal for a second round pick that is headed to Sacramento.

In case you are having trouble keeping up with all the Cavaliers moves, here’s a complete list of who the Cavs traded and received at the deadline.

The starting lineup is far from a sure thing, as multiple players will be competing for spots. LeBron James and Kevin Love will be starting, but everything else is fluid. This leaves as many as three open starting spots up for grabs. We have Hood and Clarkson playing together in the backcourt. Hill is also an option at point guard if the Cavs prefer to go with more a veteran presence.

Hood gives the Cavs scoring along with two-way capabilities. Nance has enough talent to compete for a starting gig, but the other two bigs have the edge in experience. These are our projections, but who would be part of your new starting lineup if you were the Cavs? Leave your lineups in the comments section.

Beyond keeping track of who is coming and going in Cleveland, there is a lot of takeaways from the Cavaliers trades. Here is what you need to know.

Isaiah Thomas Was Not Working Out in Cleveland

Publicly calling out the coaching staff and teammates is not a great way to endear yourself to a new locker room. Thomas did just that despite beginning his Cleveland tenure on the sideline. While the Celtics obviously got the better of the Cavs in the Kyrie Irving trade, Cleveland is cutting their losses and counting the trade as a sunk cost. Aside from the Nets 2018 first round pick, Crowder and Thomas were the centerpieces of the deal. Both players have new homes, as the Cavaliers look to shake things up to get back to being a title contender.

The Cavs may not have received any assurance from James that he sees Cleveland as a long-term fit, but that did not stop them from shuffling the deck in an attempt to retain James. There are no guarantees any of these deals work, but it was clear the Cavs were headed to a lost season with their previous roster. This likely would have hurt their chances to retain James this summer. Tension in the locker room and a lack of production seem to be key factors for the sheer amount of moves the Cavs made at the deadline.

This is one last effort by the Cavaliers to make a run at keeping James in Cleveland. They hope that completely overhauling their starting lineup and core group can cause James to ponder staying. It needs to be stated that while this may be their goal, they also helped the Lakers clear cap space to allow Los Angeles to sign two max free agents this summer. This could come back to hurt the Cavs if the Lakers are able to entice James and Paul George to head to Hollywood.

It is rare to see a team change their roster in this dramatic of a fashion with just over two months remaining in the season. The Cavs do benefit from this year’s deadline being a couple weeks earlier than it has been in years past. Cleveland will need to revamp on the fly as the playoffs start in mid-April. As Wojnarowski reported, the Cavs have taken on more payroll and increased their luxury tax. They are hoping this speaks to James on their commitment for building a winning team going forward.

The majority of the Cavs new acquisitions can play multiple positions. Hood is averaging 16.8 points and shooting 38.9 percent from the three-point line. Clarkson can play both guard positions, and is just 25 years old. Clarkson averages 14.5 points and 3.3 assists per game. One of the areas of improvement for Clarkson is his long-range shooting, but Hood’s presence helps balance that out for the Cavs. Nance averaged 8.6 points and 6.8 rebounds in 22 minutes per game this season with the Lakers. 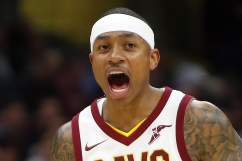