Getty Snowboarder Chloe Kim emerged as one of the faces of the 2018 Winter Olympics.

Norway will leave Pyeongchang with the most 2018 Winter Olympics medals with 39 pieces of hardware. While Norway is tied with Germany with 14 gold medals, Norway has eight more total medals as Germany sits in second with 31 medals. Canada rounds out the top three with 29 medals including 11 golds.

The United States finished fourth in both total medals (23) and in the gold medal count (9). According to Sporting News, snowboarding was the USA’s strongest sport as seven of the United States 23 medals came from the sport, including four gold medals. Chloe Kim and Red Gerard both set records as the youngest Olympic snowboarders ever to win a gold medal.

Kim was one of the most inspiring stories of the Olympics. Her parents both came to the United States from South Korea, and Kim was able to win a gold medal in their home country in front of extended family. Her father quit his engineering job to help Kim with her snowboarding training.

“I don’t think I made many sacrifices myself but my parents have,” Kim told ABC News. “If anything, I feel like they’ve given up so much for me and this is [the] least I could do, ‘Look, guys, I made it!'”

A couple of the notable American athletes that won multiple medals were snowboarder Jamie Anderson (2) and Mikaela Shiffrin (2). While Shiffrin had been public with her goal to win five medals in 2018, weather delays forced several of her events to be postponed leaving little rest time between competitions, and causing her to pull out of some additional events.

Veterans Shaun White and Lindsey Vonn both left with medals. White appears optimistic that he will compete in additional Olympics, while Vonn has noted this was likely her final Olympics.

Prior to what appears to be her final downhill competition, Vonn sent out a parting tweet.

Tomorrow I will push out of the starting gate in what will most likely be my last Olympic Downhill race. I’m trying to enjoy the moment as much as I can and I am thankful to share this race with such amazing teammates. I know everyone expects a lot from me, and I expect even…More of myself….however there’s only one thing I can guarantee; I will give everything I have tomorrow. Count on it.

Shiffrin spoke with The Denver Post about what the slopes would be like if Vonn does retire.

“I don’t necessarily feel like I’m taking over something for the sport,” Shiffrin told The Denver Post. “I don’t know if I could fill Lindsey’s shoes, the way that she has worn them. I’m going to do my best to help the sport grow in whatever way that I can. The best way that I can do that, as far as I see right now, is just to ski my best and to keep taking ski racing to a new level.”

Fans will have to wait until the 2020 Olympics in Tokyo, Japan for the next round of games. The 2022 Winter Olympics will be in Bejing, and should feature several of the American athletes that emerged in Pyeongchang.

Here’s a look at the final 2018 Winter Olympics medal count courtesy of Time. 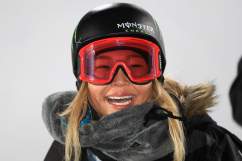