Immediately following a performance of “America the Beautiful” by Leslie Odom Jr. at the 2018 Super Bowl tonight, Pink took the field to deliver the national anthem. Dressed in white, Pink didn’t seem to show any signs that she has been battling the flu, except for towards the very end.

Prior to Pink’s performance tonight, she let her fans know, via social media, that she has been battling the flu, which she caught from her kids. In her Instagram post, Pink wrote, “Trying to practice the flu away. I’ve been waiting to sing this song since 1991 when I saw my idol, Whitney Houston, own this song. And now, my chance has finally come. And it just so happens that this chance comes when I have two small Petri dish kids who literally cough INTO MY MOUTH and rub their snot on my cheek.”

It's almost time for @Pink!! pic.twitter.com/sJIKM77ym2

Pink called the flu situation a nightmare and revealed to her Instagram followers that, “This is one of the biggest honors of my life, singing this song in front of my family, my military family, my dad and brother and step mama and family and the world. And the EAGLES!?!?! I promise I will do my best, as I always do. As far as the gremlins that got me into this mess, you can cough at me for the rest of your lives.” Despite her being diagnosed with the flu, Pink chose to carry on and deliver her Super Bowl performance the best she could.

As a major Philadelphia Eagles fan, Pink was extra excited to be a part of this year’s game day, since the Eagles are playing against the New England Patriots. When Pink first announced her Super Bowl gig on Twitter, she exclaimed that this kind of opportunity mixed with one of her favorite teams was a dream come true. Read the tweet below.

Pink’s real name is Alecia Beth Moore and she is married to husband Carey Hart. The couple has two children together. And, her family joined her at the big event today to support her.

Just before Pink began to sing, she removed her gum from her mouth and smiled. Fans on Twitter went crazy over the silly moment. Check it out in the below tweet. 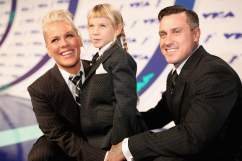 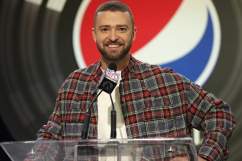