Tom Brady’s mother, Galynn Brady, served as an inspiration to the New England Patriots team and sports fans as she battled cancer. During the 2016 season, Galynn was only able to attend one game, the Super Bowl. Galynn witnessed quite a game as her son orchestrated one of the biggest Super Bowl comebacks in NFL history. Tom spoke with ABC News about what it meant to him for his mother to attend Super Bowl LI.

“It was a really special time for our family,” Tom told ABC News. “We have such great memories being there together. It’s great it turned out the way it did because it really — her treatments were ending at that point. It kind of signified not only the end of the season, but what she was going through, what our family was going through. It was a great way to end the year.”

One year later and Tom led the Patriots back to the Super Bowl. Once again, Galynn was back in the spotlight, but this time for her connection to Minnesota, site of Super Bowl LII. Galynn grew up in Browerville, Minnesota where Tom and his siblings would vacation during his childhood summers.

Learn more about Tom’s relationship with his mother Galynn.

1. Galynn Grew Up in Minnesota & Left the Area to Become a Model for Dayton’s Clothing Line

Happy Mother's Day Mom. Looking at this photo makes us all so proud. Without you none of this is possible. You are the kindest, gentlest, most loving mother a son could ever ask for. You have taught us what strength really means. Family is everything. We all love you so much.

“To be here and to be in Browerville, that really is my roots and it’s very much a part of who I am,” Tom told Yahoo Sports. “My mom lived here for 18 years and I was very lucky to come here in the summer every year and the winter sometimes. My grandpa lived on that farm [and] it was a great experience for a kid from California to have this other part of my life that was still very special.”

She left for the Twin Cities after that and worked as a model for Dayton’s clothing line before becoming a stewardess with Trans World Airlines. She was relocated to California where she met a door-to-door salesman named Tom.

Each summer, Tom experienced life on the farm with his grandparents and cousins. U.S. Bank Stadium is not rural Browerville, but the 2018 Super Bowl undoubtedly brought back childhood memories for the Brady family. 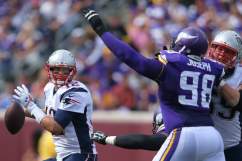 Galynn was diagnosed with stage 2 breast cancer in 2016, and has referred to it as an “aggressive” form of cancer. According to NFL Network, Galynn underwent several surgeries including two lumpectomies to remove the cancer. Tom’s mother underwent both chemotherapy and radiation as part of her recovery process.

Galynn almost did not get to travel to Super Bowl LI to watch her son after contracting both shingles and pneumonia. She was cleared to travel to the big game the day before their scheduled trip. Patriots owner Robert Kraft believed Galynn’s story was so inspirational that he awarded her a Super Bowl ring. Tom spoke with ESPN about the franchise awarding his mother with her own ring.

“He’s been so supportive of my family and certainly everything my mom went through and knowing first-hand how families deal with it,” Brady told ESPN. “He was always asking, ‘How’s mom doing? How is she feeling?’ We didn’t know up until the very end whether she was going to make it to the Super Bowl. She was a big inspiration for me, and RKK [Robert Kraft] knew it. It was a great surprise to all of us when the ring showed up. She deserves it.”

Galynn was also honored with a number of other cancer survivors prior to a Patriots game during the 2017 season. She is screened every three months, and most recent reports indicate the screenings have come back clean.

3. Tom Sr. Was Planning on Being a Priest Before He Met Galynn

According to The Athletic, Tom Sr. was planning on becoming a priest then he met his future wife Galynn. His plans to become a priest never materialized after that meeting. Tom’s father may not have become a clergy member, but his Catholic faith remains important to him. According to Catholic.org, Tom Sr. spoke at one of the Worcester Diocesan Men’s Conferences about the role of faith in the Brady family.

“There’s no Pollyanna in the Brady family,” Tom Sr. explained (via Catholic.org). “We have in our family experienced the pain of divorce, the anguish of family feuds. We’ve been addicted with the Irish flu — or perhaps that’s alcoholism. And other addictions as well…Through the resources of our Catholic faith, there’s been some degree of normalcy in our lives. Even though there’s been a lot of pain in a lot of areas, there’s been a tremendous amount of joy. That’s what this journey is about. Actually, I think the journey could be summed up as living out the ordinary in these extraordinary times.”

4. Galynn & Tom Sr. Have Three Daughters in Addition to Tom

Tom grew up with three sisters: Maureen, Julie and Nancy. Tom was not the only athlete in the family, as all three of his sisters were standout high school athletes. According to Boston.com, Maureen went 111-10 as a softball pitcher, including 29 no-hitters and 14 perfect games. She received a softball scholarship from Fresno State, and was inducted into the San Mateo County Hall of Fame for her high school accomplishments.

Julie started as a walk-on soccer player at St. Mary’s, and eventually earned a scholarship on the team. Nancy had a scholarship offer from Cal-Berkeley to play softball, but she opted against playing college softball. Tom spoke with The Post Game about growing up in the shadows of his sisters.

“They were the best athletes in my house — certainly a better athlete than I ever was,” Tom told The Post Game. “I just loved tagging along and I was living and dying with every loss they had.”

5. Galynn Was the 1961 Homecoming Queen at Browerville High

Super Bowl LII brought a lot of attention to the small town of Browerville. Tom grew up visiting his family in Browerville every summer, and the Patriots playing a Super Bowl in Minnesota had special significance for the New England quarterback.

Galynn stayed busy in high school with lots of extracurricular activities including being a cheerleader and senior class treasurer. Galynn was named the homecoming queen during her junior year. Sports Illustrated detailed Galynn’s life growing up in Browerville.

Galynn, who was sometimes called “Dumplin’” around town, is a popular woman in Browerville. Before she moved to California for a job as a flight attendant with TWA, she was voted homecoming queen at Browerville High as a junior in 1961. A quick scan of the 1962 Tiger’s Roar yearbook shows that she was the secretary of the dance band, a football and basketball cheerleader, and senior class secretary-treasurer. She also acted in the senior play and led “Our Prayer For World Peace” at the 1962 graduation ceremony.