Getty Duke has a good chance to cut down the nets during the 2018 NCAA tournament.

By now, you have a feel for your upset picks, and some basic principles for filling out your bracket. It is time to explore who will be cutting down the nets in San Antonio.

For all the talk of Cinderella during March Madness, as the tournament continues the teams left standing are usually familiar names. While the first two rounds have its share of upsets, the Elite Eight and Final Four is typically full of top seeds.

No. 1 Villanova, No. 2 Purdue and No. 5 West Virginia are the teams to watch in the East region. The South is full of a number of contenders that could make a run at the Final Four including No. 1 Virginia, No. 2 Cincinnati, No. 4 Arizona and No. 5 Kentucky. No. 1 Kansas, No. 2 Duke and No. 3 Michigan State will be fighting for the Midwest region, creating potential pairings that look similar to a tip-off classic event. Finally, No. 1 Xavier, No. 2 North Carolina, No. 3 Michigan and No. 4 Gonzaga all have a chance at winning the West region.

Heres a look at my Final Four and NCAA tournament championship predictions.

GettyDeandre Ayton has Arizona looking like a title contender

The South is one of the most difficult regions, and I like Arizona to end up in the Final Four despite a difficult path to get there. Potential No. 1 draft pick Deandre Ayton is playing like the best player in the country, and no team has a player that can match up against Ayton. He is polished on the block, and shoots the mid-range jumper like a guard.

Ever since the ESPN report linking Sean Miller to a pay-for-play scheme, the Wildcats have been playing lights out. I like Arizona to get past Kentucky and Virginia to likely face Cincinnati in the Elite Eight. Look for Sean Miller to make his first Final Four.

GettyGonzaga has a chance to go to back-to-back Final Fours.

Based on the KenPom Ratings, Gonzaga was drastically underseeded. The Zags rank as the No. 8 team in the country, and have not lost since mid-January. Gonzaga brings their 14-game win streak into a winnable West region. Johnathan Williams and Josh Perkins are back from last year’s squad that made the title game. Big man Killian Tillie is starting to play his best basketball just in time for the NCAA tournament.

Gonzaga likely faces Xavier in the Sweet 16, and the Musketeers are the weakest No. 1 seed in the bracket. North Carolina is the favorite in the region to advance to the Elite Eight, but I think there is a chance Providence can pull off the upset for a deep run to potentially face Gonzaga.

GettyVillanova has been one of the most consistent teams in college basketball.

Outside of Virginia, Villanova has been the most consistent team in the country this season. According to OddsShark, Villanova is the favorite to win the championship. The Wildcats have one of the best veteran duos in Jalen Brunson and Mikal Bridges. They enter March Madness tested in the Big East tournament, which was one of the most competitive conference tournaments.

Villanova could be tested in the Round of 32 by Alabama and Collin Sexton. I like them to escape with a narrow victory, and have a clear path to the Final Four from there. They will likely face Wichita State in the Sweet 16. Purdue is the favorite to make the Elite Eight, but the Boilmakers stand a good chance of getting upset by Butler or Florida along the way.

GettyDuke is one of the most talented teams in the bracket.

Duke has a very difficult path to making it to San Antonio, but has the most talented team in the country. Duke ranks No. 3 in the KenPom Ratings, and is third in the Vegas championship odds. The trio of Marvin Bagley, Grayson Allen and Wendell Carter has the Blue Devils eyeing a championship run.

Look for Duke to win a close matchup against Michigan State in the Sweet 16 then face Kansas in the Elite Eight. Duke has the right mix of big men and strong guard play to match up with any team in the country.

This is the rare year where we are without a No. 1 seed in the title matchup. Duke has multiple big men they can throw at Ayton. Bagley, Carter and Bolden will all take turns guarding Ayton. Gary Trent Jr. and Trevon Duval both match up well with Alonzo Trier. FiveThirtyEight’s projections have Duke’s title hopes just behind Villanova and Virginia. The combination of Allen along with Duke’s freshman phenoms gives Mike Krzyzewski another championship. 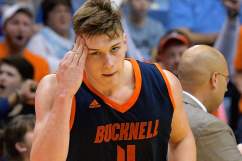