Josh Allen is projected to be one of the top quarterbacks in the 2018 NFL Draft, but old tweets surfaced on the eve of the draft that could impact where Allen is drafted. Yahoo Sports detailed a series of old tweets from Allen dating back to 2012 and 2013 when Allen was in middle/high school. Allen tweeted the n-word multiple times during this time frame. Here’s Yahoo’s account of the tweets that have now been deleted.

“@cheriishhh: i dont think you n—–s want a troubled son!”

He also responded to a question that looks like was asked of him on AskFM in 2013, saying “If it ain’t white, it ain’t right!”

Allen apologized in an interview with ESPN’s Stephen A. Smith, calling himself “young and dumb” at the time. Allen also noted some of the tweets were quoting rap lyrics and television shows. ESPN detailed Allen’s rationale for the tweets, and reported the tweets were deleted back in January.

Allen told Smith that some of the tweets made reference to rap lyrics and television, including a saying that was part of an episode from the sitcom “Modern Family.”

On ESPN’s First Take on Thursday, NFL Insider Adam Schefter reported that his sources indicated Allen’s Twitter account was vetted in January and that the offensive tweets were removed then.

ESPN’s Adam Schefter reported that there is some speculation that the tweets were leaked by a team hoping it would cause Allen to slide to them in the draft.

“A theory two people in the past hour now have floated: another team plotted to have Josh Allen’s racially insensitive tweets put out just before the draft in order to increase the chances he would fall in the draft to that team,” Schefter tweeted.

Allen along with quarterbacks Sam Darnold and Baker Mayfield have all been mentioned as possibilities for the Browns at No. 1. If Allen does slide in the draft, it would not be the first time we have seen a player’s social media posts impact his draft stock. Laremy Tunsil was projected to be a top five pick before drug-related posts surfaced minutes before the 2016 draft.

Allen was not recruited coming out of high school, and spent his freshman season playing at a community college. Allen transferred to Wyoming after being offered, and has risen up draft boards over the last year. After returning to Wyoming last season, Allen was an early favorite to be the 2018 top pick.

Here’s screenshots of some of Allen’s old posts.

Josh Allen deleted the first 2 tweets but not the 3rd one….? pic.twitter.com/B9cV1g7fjH

If the Bills end up with Josh Allen this could be awkward :) …his old tweets being RT all night are gold lol pic.twitter.com/q8HewjttM6

When girls say "dream about me" she wants the D! 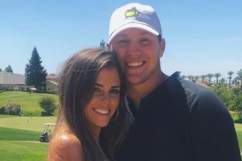