Patrick Reed has an estimated net worth of $9 million, according to Celebrity Net Worth. The professional golfer won the 2018 Masters Tournament, and will take home $1.98 million.

Heading into the final round at Augusta National on Sunday, April 8, he sat 14-under and held a three-stroke lead over Northern Ireland’s Rory McIlroy. The two teed off at 2:40 p.m. Eastern. Reed was accompanied by his brother-in-law and caddie, Kessler Karain, the younger brother of his wife, Justine Reed.

1. He Stands to Win Part of the $11 Million Purse at the 2018 Masters Tournament

According to the PGA’s official website, the prize money for the 2018 Masters Tournament totals $11 million. The golfer who finishes in first place will leave Augusta National with $1.98 million, with second place earning $1.19 million. Any golfer who made the cut and finished in the top 50 can expect to earn at least $27,720.

“It’s worth noting that the payout for all players is larger than most events because the Masters field is so small. Only 87 players teed it up at Augusta National on Thursday. A regular PGA Tour event typically features a 156-player field, as do the other three majors,” the PGA’s official website reads.

Sitting at the top of the leaderboard, Reed’s three-stroke lead gives him a decent shot at the green jacket, or at least receiving one of the larger payouts for the event. According to USA Today, he also has an opportunity to make Masters history.

Having shot 69, 66 and 67, respectively, over his first three rounds, Reed was positioned to be the first player ever to shoot four rounds in the 60s. No golfer had shot below 70 in all four rounds in any of the 81 previous editions of the storied tournament. Reed’s final score of 71 means that the feat still has yet to be accomplished.

“Reed might need a sub-70 round to hold off Rory McIlroy, the four-time major champion who is a Masters victory short of becoming the seventh player to complete the career Grand Slam,” USA Today reported.

In less than a decade, Reed has amassed more than $20 million in winnings. Having turned pro in 2011, he has $20,108,933 in career winnings and currently sits 70th on the all-time earnings list, according to ESPN.

According to the PGA Tour’s official website, Reed missed the cut at his first Tour event, the 2011 FedEx St. Jude Classic. He competed in two more events that year, the Wyndham Championship and the Frys.com Open, finishing tied for 66th (2-under) and tied for 75th (2-over) respectively. He earned a reported $20,058 in 2011.

In 2013, Reed finally earned his first million, raking in $1.9 million over 26 Tour events. The 2013 Wyndham Championship was his first Tour win, and one of five finishes inside the top 10.

Reed earned more than double that amount in 2014, capturing $4 million over 28 Tour events, with wins at the Humana Challenge and World Golf Championships-Cadillac Championship. He placed in the top 10 in two other tournaments.

Over the course of 27 Tour events in 2015, Reed took in another $3.5 million in winnings. Notable finishes include a win at the Hyundai Tournament of Champions and tying for second place at the Valspar Championship, with four total top 10 finishes.

The 2016 season saw Reed continue his winning ways, with a first-place finish at The Barclays. He also enjoyed second-place finishes at the Hyundai Tournament of Champions and the Valero Texas Open. Over the course of 28 Tour events, Reed won nearly $5.7 million.

Reed’s streak of seasons with a tournament win came to an end in 2017. He finished the PGA Championship tied for second, one of four top 10 finishes of the year. Reed earned $3 million while participating in 29 Tour events.

Prior to the Masters, Reed has played in 12 Tour events in 2018. He finished the Valspar Championship tied for second, one of three top 10 finishes on the year. Reed had, so far, earned nearly $1.5 million for the 2018 season.

His win at Augusta would allowed him to leapfrog 14 golfers and move into 56th. He passed Marc Leishman, who went into the final round tied for sixth at Augusta at 6-under, who had been 63rd all-time for money, with $21.2 million

Reed might be a newcomer, relatively speaking, but he already has some major endorsement deals under his belt. In 2018, he left Callaway Golf and joined forces with Nike. He made the announcement on social media. You can see his tweet below.

I am so proud to announce that I have signed with Nike! I am so happy to return to the Nike family and be a part of such an elite group! #Nike #justdoit #NikeGolf pic.twitter.com/NRGRS6UsWc

According the official PGA Tour website, Reed previously had a deal with Nike but left for Callaway in the middle of 2013. His new deal “will only include apparel following the company’s departure from the hard-goods industry in 2016.” This means that Reed will be wearing Nike apparel and footwear when he competes.

While the details of Reed’s deal with Nike are unclear as far as money goes, he has been taking the new deal seriously. In fact, Nike has blocked Reed from wearing red on the final day of the 2018 Masters Tournament; you will see him in pink today.

According to SB Nation, some people thought the decision came because of Tiger Woods’ long-standing tradition of wearing red on Sundays, but that’s not actually what’s going on, according to Reed.

“Nike [is] doing a new thing where all all the players stay in the same kind of story line. So all the players will either be in this color or that gray, grayish black today and yesterday and then all of us will be in the same color tomorrow and Saturday and Sunday,” Reed told the media on Friday, April 6.

The Team Reed Foundation was started in 2016 as a way for Reed to give back to his community.

“The Team Reed Foundation donates to St. Benedict’s Homeless Shelter in Owensboro, Kentucky, the Ronald McDonald Foundation, Fischer House, Duke Center of Cancer Research, and the American Junior Golf Association. The Team Reed Foundation is currently focusing on smaller charities that are in desperate need to help improve people’s lives, along with impacting local and national charities to change people’s lives. Team Reed hopes to build this foundation to help serve people and give back to those in need locally, nationally, and worldwide,” reads the description on the charity’s website.

After Hurricane Harvey, the Team Reed Foundation stepped up to help those in the Houston, Texas, area.

5. His Caddie Is 1 of the Highest Paid in the Sport

In June 2017, Forbes estimated that Reed’s caddie and brother-in-law, Kessler Karain, was among the highest-earning caddies in professional golf. Forbes looked at the PGA’s top-earning players for the previous 12 months and applied the traditional caddie pay structure in order to estimate the earnings of the highest-paid bagmen in the business.

At one point, caddies were traditionally paid according to a scale, 5, 7, or 10 percent based on whether their player made the cut, finished in the top 10 or won the event outright. Additionally, they were given between $1,500 – $2,500 per event, which should cover expenses for the tournament. That formula has been updated a little over the years.

“But today, most established players pay their caddies 8% of total winnings and 10% for a win, according to golf insiders, although the actual terms of a contract can vary. We applied this formula as a basis for caddie earnings between June 2016 and June 2017 for the top players on the Tour,” the Forbes story reads.

In addition to the money he earns caddying for his brother-in-law, Karain is also a brand ambassador for Bushnell Golf and Blenders Eyewear. 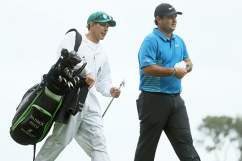