Getty Rickie Fowler with his parents Lynn and Rod and girlfriend Allison Stokke at the Presidents Cup.

Rickie Fowler grew up in Murrieta, California before heading to Stillwater to attend Oklahoma State. His parents, Lynn and Rod Fowler, have watched their son’s ascent since he built a makeshift golf course in their backyard.

Rickie’s father, Rod, owns a trucking company, and is a former dirt bike racer. Rod and his son used to race bikes together prior to a high school accident that caused Rickie to give up the sport in favor of focusing on golf.

“Everybody kind of said he was like my shadow out there,” Rod explained to PGATour.com. “Everywhere I went, he’d go. He was also our guy that would jump everything. We’d find things and he wasn’t afraid to hit them…He came to me and said ‘I think we need to sell my motorcycle.’ I was a little bummed. But now I can see where it all made sense.”

Rickie’s mother, Lynn, believes it is Rickie’s hard work at a young age that helped him become one of the top golfers in the world. When he became old enough to work, Rickie’s parents gave him a choice of getting a part-time job or treating golf like a job.

“I told him if you want golf to be your career during high school, then you have to spend at least four hours a day on it after school, like you would at a job,” Lynn told PGATour.com.

Rickie chose golf, and has never looked back.

Rickie isn’t the only athlete in his family as the entire crew rode bikes. According to the Golf Channel, Lynn won a 24-hour mountain bike race as part of a five-woman team that competed in Idylwild, California. When his mother rushed back from the airport to see the end of Rickie’s tournament, Rickie admitted his mother is a good driver.

“She can handle herself behind the wheel,” Rickie told Golf.com. “We grew up riding and racing dirt bikes. She can manage.”

Normally, Rickie wears orange on Sunday, a nod to his Oklahoma State days. For the final round of the 2015 Players Championship, Rickie opted to wear pink on the final day as a way to honor his mom on Mother’s Day, and he went on to win the tournament.

“Thank you for Mother’s Day, but today is your day,” Lynn recalled her conversation with Rickie to PGATour.com. “Go out, kill it and do this for you. I was trying to take all the emotion out of the day for him. I didn’t want it to be about me, I wanted it to be about him.”

2. Rickie Learned How to Golf From His Grandfather, Taka, on the Murrieta Valley Driving Range

Rickie did not learn to golf on a fancy golf course, instead he went to the Murrieta Valley Driving Range with his grandfather, Taka Tanaka.

“I would pick him up at 2 o’clock on a school day, and we just did things together,” Taka told Golf Digest. “He didn’t talk much, mostly just watched. When we fished, he did everything right, and he had that patience where he didn’t mind if he didn’t catch anything. In golf, we were both beginners, but he could hit the ball, and he could concentrate, and he had drive. Those things came from his parents, not me.”

The two are so close Rickie had Taka’s name in Japanese tattooed on his left bicep.

“I thought, Wow, that’s a tender place; had to hurt,” Taka told Golf Digest. “Rickie did that with a deep feeling. It touched me pretty good.”

GettyRickie Fowler with his parents, Lynn and Rod Fowler.

According to Golf.com, Rickie’s mother is Japanese & Native American (Navajo). Rickie noted he is proud of his heritage.

“I’m a quarter Japanese,” Rickie explained in an interview with Golf Channel.

Lynn’s father was taken into a World War II Japanese internment camp in Heart Mountain, Wyoming away from their Pomona, California home where his father started a poultry business.

“I was so young, I didn’t understand the hardship,” Taka told Golf Digest. “Even after the war, we weren’t allowed to come back to California for two years and ended up going to New York state. My father was able to keep a business going and bring us back, but some of our friends lost everything. My parents hardly ever mentioned it, and I never talked to Rickie about it.”

4. Rickie Grew Up Riding Dirt Bikes With His Dad

Rickie’s father was a motocross racer, and got his son involved in racing. It was something the entire family enjoyed doing together as Golf Channel detailed.

Part of that is the now well-told story of the motocross breeding in Fowler. Rod won the Baja 1,000 on a four-wheeler in 1986. He raced hard and rode tough. He has broken his ribs and punctured his lungs more than once in crashes. He had Rickie riding a dirt bike when Rickie was just 3. The entire family rides, including Rickie’s mother, Lynn, and younger sister, Taylor.

When Rickie was younger, the family would travel with Rod to the different race tracks. Golf.com detailed how the family first bonded over racing.

Rod Fowler didn’t know golf, but he sure knew gearboxes. Through much of the 1980s, he made a living driving trucks and competitively racing off-road vehicles—dirt bikes, four-wheelers, that sort of thing. In 1986, he and two teammates won the “quad” class in the grueling Baja 1000. Rickie was born two years later and quickly acquired his dad’s need for speed. It was a way of life. Every month or so Rod packed up the family—wife, Lynn, Rickie and his younger sister Taylor—in an R.V. and drove out to remote desert outposts to ride bikes and dune buggies with friends. Weekends on the Monterey Peninsula they were not.

5. Rickie’s Sister & Mother Missed Their Flight to Watch Him Win the 2015 TPC Sawgrass

Rickie Fowler with his sister Taylor during the Par 3 Contest at the 2016 Masters.

During the 2015 TPC Sawgrass, Rickie’s mother and sister, Taylor, were on their way to the airport as Rickie finished up the last few holes of the final round. Rickie was making a furious comeback, and his family turned around from the airport to head back to the course. Golf.com detailed their race to see Rickie’s finish, and ultimately missed their flight.

With Fowler not making much of a charge early in his final round, his mother, Lynn, and sister, Taylor, left the course and checked in to board their flight at the Jacksonville International Airport, but they decided to rush back to TPC Sawgrass when Fowler birdied the 17th hole of regulation.

Rickie knew they were planning on leaving early so it was a pleasant surprise when they were able to celebrate with him after his remarkable tournament win.

“I knew they were planning to leave at four or so, so I assumed with my less-than-stellar play the first 12 holes that they were well on their way, because I was out of contention,” Fowler explained to Golf.com. “Then I had found out because I think my caddie was checking in to see if they were out or back, and found out they were on their way back, and they made it back in time.” 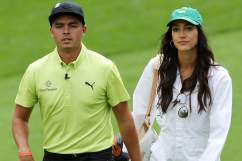