Thankful for this past year with you!! Love you ❤️

April 2018 is a big month for Saquon Barkley. Not only is Saquon slated to be the first running back selected in the 2018 NFL Draft, his girlfriend Anna Congdon gave birth to their first child just two days before the draft.

Saquon is facing surprises all around as the couple did not know the baby’s gender until her birth, just as Saquon waits to see what NFL team will select him. Something tells us he won’t have to wait long as Saquon is likely a top five pick.

Family has always played a big role in Saquon’s life as the running back is constantly talking about the impact of his parents, Tonya Johnson and Alibay Barkley, on his life. Saquon has accomplished his NFL dreams thanks to his family overcoming numerous obstacles.

Words can’t even describe how I feel right now. You are the most beautiful thing I’ve ever seen in my life. Thank God for blessing me with you in my life and into my arms. I pray that I can be the best father to you and help you grow into an amazing woman. I love you so so so much #DaddysLittleGirl Jada Clare Barkley 4.24.18 ❤️

Not only is April the month Saquon heads to the NFL, he and his girlfriend welcomed their first child, Jada Clare Barkley, into the world two days before the draft. There had been some concern the birth would not happen before the draft, and Saquon told Penn Live he was prepared to leave the draft festivities if Anna went into labor.

Saquon Barkley discussed fatherhood at #PennState’s Pro Day. His draft plans and what he learned from his own father. pic.twitter.com/oh5YdCMaqZ

Saquon noted before the birth he was thrilled to meet their new child, and it adds a little extra motivation as he heads to the NFL.

“It’s awesome,” Barkley told Penn Live. “I’m excited. I’m not sure of the gender, that’s going to be a surprise, but April’s going to be a big month for me. Some people aren’t even blessed with the opportunity to have kids, and I’m able to have one, and I’m truly excited to be a father.”

2. As a New Father, Saquon Says He Is Heading to the NFL “For Myself & My Kid”

Thankful for this past year with you!! Love you ❤️

Saquon has been adamant about his love for the game, but admits things have taken a more serious tone as he prepares to be a father. Not only is Saquon providing for himself, but his new family.

“Now, you have to take more of a bigger role, be more responsible,” Saquon told Penn Live. “Now, you’re not just training for yourself and training to be great; this is how you provide for your family, and you also have to look at football from the business side. Obviously, you want to play the sport and have fun with it, but now it’s bigger than you, you have a family to provide for, and I’m super excited and everything I’m doing is for myself and my kid.”

Words can’t even describe how I feel right now. You are the most beautiful thing I’ve ever seen in my life. Thank God for blessing me with you in my life and into my arms. I pray that I can be the best father to you and help you grow into an amazing woman. I love you so so so much #DaddysLittleGirl Jada Clare Barkley 4.24.18 ❤️

3. Saquon’s Mother Opted to Move the Family From the Bronx to Bethlehem to Try to Get Saquon’s Father Out of Trouble

According to Lancaster Online, Saquon’s father relapsed into drug use after their son’s birth, and was finding it hard to escape trouble in the Bronx. Tonya offered her husband an ultimatum, she was moving the family to Bethlehem with or without Alibay. Lancaster Online detailed the crossroads of Saquon’s family.

But as a younger adult – at 19, younger than his son is now – Alibay was arrested on a gun charge while on probation, and spent a year in Rikers Island Prison.

After Saquon was born, in the Bronx, Alibay relapsed into drug use. Saquon’s mother, Tonya Johnson, held the family together and opted to move it to Bethlehem, where she had family, with or without their father.

Alibay followed them to Lehigh Valley, and the family eventually settled in the small town of Coplay. Johnson worked two jobs. Alibay worked in food service and is now a cook. He made sure his son made football practice even when the family didn’t have a car to drive him there.

4. Saquon’s Father Spent a Year at Rikers Island Prison After Being Arrested on a Gun Charge

Alibay hit bottom before things got better. According to Lancaster Online, he spent a year at Rikers Island Prison, a notoriously tough environment, after violating his probation on gun charges. Saquon notes his father has been open and honest about his past. His transformation is why Saquon calls his father a “role model”.

“I know I’m going to make mistakes in my life and I know that my father made mistakes in his life,” Barkley told Lancaster Online. “You have to respect him as a man. A lot of people can’t look their kids in the face and tell them the decisions that they made were awful and the mistakes they made were bad. That helped me. You guys every single day talk about how good I am, how good my character is. That’s not because of me. That’s because of my family. It’s my mom and my dad.”

5. Saquon Promised to Buy His Mother a House After the NFL Draft

See you're, unbreakable, unmistakable Highly capable, lady that's makin loot A livin legend too, just look at what heaven do Send us an angel, and I thank you!!! Happy Birthday to the most beautiful woman in the world love you Mom ❤️❤️❤️

Saquon is about to earn a lot of money in the NFL, but his first paycheck has already been promised. Saquon told ESPN his first purchase will be a house for his mother.

“They’ve done so much for me and made so many sacrifices, that I want to give them the world,” Saquon told ESPN (via PSU.edu). “Especially my mom and dad. I promised my mom when I was a little kid that I was going to buy her house one day, I’m going to stay true to that promise. God blessed me with an opportunity to live my dream.”

His mother played a big role in keeping the family together. Saquon spoke with Bleacher Report on how his mother helped his father turn things around.

My mom got pregnant at a young age, 15. She gave birth at the age of 16. My father was a normal kid in the streets of New York, doing dumb stuff. He could have really jeopardized his life. …

Then my dad got caught up in a drug habit. Life could have went the other way, but my mom was in his life. My mom told him: ‘I don’t want my kids to go through this. I don’t see a great future for them here.’ My mom basically told my dad that he’s got to stop doing what he’s doing and get right. And then they moved to Pennsylvania. 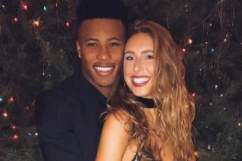