Getty There is growing buzz that Baker Mayfield will be the top pick in the 2018 NFL Draft.

After weeks of speculation that the Cleveland Browns were choosing between Sam Darnold and Josh Allen with the No. 1 pick, the latest buzz has the Browns selecting a different quarterback. ESPN’s Adam Schefter reported Baker Mayfield is the new favorite to be drafted by the Browns with the No. 1 pick.

“Browns continue to keep the decision on their No. 1 pick a secret, but there is a mounting belief from HCs and GMs around the league that Cleveland will take Baker Mayfield,” Schefter tweeted.

“I’ve long said Sam Darnold should be the pick here, but the latest buzz has Mayfield landing at the top,” Jeremiah writes.

Mayfield may have plenty of buzz, but there remains skepticism over the Browns actually pulling the trigger on selecting Mayfield. NFL Network’s Ian Rapoport reported that some GM’s feel this news is a smokescreen.

“…The point was, even with clear buzz between the #Browns and Mayfield, other GMs are kinda like: 1. Yeah, we’ll see or 2. No way Dorsey takes him. 3 hours to go,” Rapoport tweeted.

“All along I have believed it would come down to Darnold or Baker Mayfield for the Browns,” Zegura writes. “I do think Mayfield was given incredibly strong consideration, but the total package presented by Darnold was just too promising for the Browns to pass.”

NFL Network’s Mike Mayock and Sports Illustrated’s Peter King both have the Browns drafting Darnold. King explains why he believes the Browns will go the safe route.

Though half the free world has Josh Allen to the Browns, it’d still be a risk because he didn’t dominate mid-level competition. Dorsey is a measurables guy, and Allen is THE measurable quarterback here (6’5″, 237 pounds, 4.79 in the 40). But a couple of factors influenced my call here. One is Mike Mayock. The NFL Network conscience has a way of cutting through the gorgonzola and stating reality. He said the Browns have made too many mistakes on quarterbacks, and they can’t go risky here. It made a lot of sense—and Mayock is a guy who loves the long-term Josh Allen. And we’re all prisoners of the people we know in this league. And someone I trust, who is very often right and is very well-connected, told me Sunday it’s not Allen. Ladies and gentlemen, this is the Science of the Mock. Darnold is safe, with strong potential, and most NFL folks think he can turn around the turnover bug (37 career turnovers in 26 USC games). Darnold’s a jock who wants to be a great football player. And at 8:46 p.m. Sunday, that’s where I am. All I can say is, good luck to anyone who bets on the first pick in the draft based on my waffling logic.

Bleacher Report’s Matt Miller has the Browns selecting Darnold in his final mock, but is also hearing that Mayfield could be the pick.

I felt good-ish about this pick until Thursday morning. When writing this on Monday, I would have said it’s 50/50 down to Sam Darnold and Josh Allen. Now, on Thursday morning, it seems the intel is swinging to Darnold or Baker Mayfield. In previous years, I knew it was Jared Goff or Myles Garrett. This year is educated guessing.

Darnold should be the pick, though. The Browns can’t afford to shoot for the moon with Josh Allen—a player I like, but one who needs development. Instead, John Dorsey and Co. have to think about the environment they live in. The Browns have been bad for 20 years since coming back into the NFL. They haven’t had a single franchise quarterback in that time. Darnold might not be the best quarterback from this class in five seasons, but he won’t be the worst.

For the first time in a long time, fans may not know who the No. 1 pick will be until NFL commissioner Roger Goodell announces his name tonight. 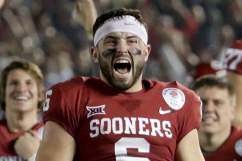 Read More
Cleveland Browns, Football, NFL, NFL Draft
Will the Cleveland Browns draft Baker Mayfield with the No. 1 pick? Find out who the favorite is to get drafted by the Browns with the top pick.