Getty Charley Hoffman and teammate Nick Watney, both from California, will walk to the tee box to the sound of Tupac's California Love. (Photo of Tupac is a wax statue dedicated in his honor in 2015.)

The Zurich Classic field has an eclectic mix of players ranging from Jordan Spieth and Justin Thomas to David Duval and John Daly. Over the weekend, it’ll also feature an eclectic mix of walk-up music, with players striding to the tee box to music played by everyone from Tupac to Metallica.

The Zurich Classic walk-up music is one of a handful of elements that makes the tournament, taking place this weekend at the TPC Louisiana outside of New Orleans, unusual. The tournament also features the PGA Tour’s only team format, with two-player pairs alternating between best ball and alternate shot formats.

The tournament’s second round takes place Friday. When it’s completed, the top 35 teams will make the cut and advance to play over the weekend. That’s when the fun starts, from a music standpoint. Walk-up music, a feature unique to the Zurich Classic, will make its debut on Saturday, and continue into the final round on Sunday.

There will be some country music over the weekend, with Garth Brooks and Toby Keith among the artists selected. But of the five performers featured by two or more teams, two are hip-hop icons and three are rock bands that dominated the scene in the 70s and 80s. Four teams have selected music by Metallica, with three of the four selecting Enter Sandman, which played a prominent role in the sports universe as the entrance music for Mariano Rivera. Two teams will take to the tee boxes listening to AC/DC, while two apiece will use tracks from Tupac and Drake and two apiece will come out to Van Halen.

Here’s a full rundown of the music on tap, courtesy of the PGA. (A handful of teams have not committed to a particular song; at least half of the teams in the tournament will miss the cut, meaning they’ll have to wait until next year, if they’re back for the tournament, to have a chance to come out to the songs they’ve selected.)

Chez Reavie and Lucas Glover: For Whom the Ball Tolls, by Metallica

Patrick Reed and Patrick Cantlay: Eye of the Tiger, by Survivor

Greg Chalmers and Cameron Percy: Down Under, by Men at Work

Keegan Bradley and Jon Curran: Shipping up to Boston, by the Dropkick Murphys

Steve Stricker and Jerry Kelly: As Good as I Once Was, by Toby Keith

DA Points and Kyle Thompson: Working for the weekend, by Loverboy

Shane Lowry and Padraig Harrington: Beautiful Day, by U2

Brandon Harkins and Lanto Griffin: Started from the Bottom, by Drake

Jason Day and Ryan Ruffels: Down Under, by Men at Work

Matt Every and Sam Saunders: Running With the Devil, by Van Halen

Xinjun Zhang and Zecheng Dou: Believe in Myself, by Zero Point Band

The PGA also created a Spotify play list featuring some of the best songs. You can listen to it below:

As PGATour.com’s Mike McAllister notes, many teams opted for a song with a local theme. The two teams using Tupac’s California Love — Brendan Steele and Jamie Lovemark and Charley Hoffman and Nick Watney — are comprised of Californians. The team of Keegan Bradley and Jon Curran, both from the Boston area, went with the Dropkick Murphy’s Shipping up to Boston. The Australian duo of Jason Day and Ryan Ruffels went with Down Under, by Men at Work. Shane Lowry and Padraig Harrington, both from Ireland, are going with Beautiful Day, by fellow Irishmen U2.

Steve Stricker and Jerry Kelly, the top two players on the PGA Champions Tour, are going with As Good as I Once Was, by Toby Keith. The key part of the chorus: I ain’t as good as I once was. But I’m as good once as I ever was.

MacKenzie Hughes and Corey Conners, both from Canada, went with Big League, by Tom Cochrane and Red Rider, as a tribute to the Humboldt Broncos junior hockey players who were killed in a bus accident earlier this month.

You can watch a special tribute performance by Cochrane in the video below: 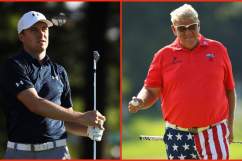