Colombia needs a win against Senegal to guarantee they will advance to the Round of 16. A draw means they would need Japan to lose to Poland, and also top Japan in goal differential. A loss would eliminate Colombia from advancing to the Round of 16.

Here’s a look at where Colombia stands in Group H after two matches. Note that the first two teams in each group advance to the Round of 16. Colombia sits in third, but still has a chance to win the group.

Colombia takes on Senegal on Thursday, June 28 at 10 a.m. Eastern. A win would guarantee Colombia at least second place in Group H, allowing them to advance to the Round of 16. Colombia fans should be rooting hard for Poland against Japan. Poland has already been eliminated, and a win against Japan can only help Colombia.

If Colombia draws against Senegal, they would need Poland to at least tie Japan. At this point, it would come down to goal differentials, which is simply the difference in goals a team scored compared to goals a team has allowed. Heading into the final match, Colombia has the highest goal differential at two, which means they scored two more goals than their opponents in their matches.

If Colombia is able to win their group, they would face either Belgium or England. Both countries have already punched their ticket to the Round of 16. Belgium and England square off in their final match of group play. The winner or the leader once tiebreakers are activated will face the runner-up of Group H.

Colombia, if they are able to win Group H, would play the runner-up on Tuesday, July 3 at 2 p.m. Eastern. If Colombia comes in second, they will face the Group G winner on Monday, June 2 at 2 p.m. Eastern. A loss to Senegal would eliminate Colombia from the World Cup.

Colombia’s 3-0 win over Poland could be the injection of life the team needed after a lackluster opening match against Japan. Prior to Colombia’s win, The Guardian suggested manager Jose Pekerman may not be the man for the job.

Four years ago José Pekerman was hailed as the dream maker. Argentinian by birth but adopted by Colombians as one of their own, he stepped off the plane after the Brazil World Cup to a hero’s welcome. Four straight victories had sealed history. Colombia’s joyous football and infectious dancing had helped heal an international reputation long battered by war, drugs and bad news. In front of hundreds of thousands of people who had deliriously spilled into Bogotá’s main park for the welcome-home party, the reticent coach shuffled across the stage to address the nation.

“We’ve a wonderful generation of players,” Pekerman proclaimed. “We’re as good as anyone in the world.” At long last it seemed South America’s second-most populous nation was set to deliver on its immense promise…

For Colombia’s longest-serving and most successful manager, the Poland game may also ultimately determine how he is remembered. 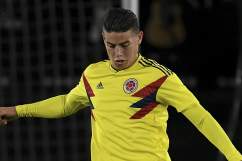