Cristiano Ronaldo is one of the most recognizable athletes in the world, but his girlfriend, kids and family are still what is important to him. Away from soccer, Ronaldo enjoys spending time with his girlfriend, Georgina Rodriguez, and their four children: Christiano Jr., Mateo, Eva and Alana.

According to Biography.com, Ronaldo was born in Funchal, Madeira, Portugal, a small island off the western coast. Ronaldo spoke about his humble beginnings in an article he wrote for The Players’ Tribune.

I had just started playing real football. Before, I was just playing in the streets of Madeira with my friends. And when I say the street, I don’t mean an empty road. I really mean a street. We didn’t have goals or anything, and we had to stop the game whenever the cars would drive by. I was completely happy doing that every day, but my father was the kitman for CF Andorinha — and he kept encouraging me to go and play for the youth team. I knew it would make him really proud, so I went.

The first day, there were a lot of rules that I didn’t understand, but I loved it. I got addicted to the structure and the feeling of winning. My father was on the sidelines at every match with his big beard and his work trousers. He loved it. But my mother and my sisters had no interest in football.

1. Rumors Emerged Ronaldo Is Engaged to Girlfriend, Georgina, After She Posted a Video of a New Ring

After Rodriguez posted a video on her Instagram story showing off a new ring, rumors started that the couple could be engaged. The above photo Ronaldo posted after his Champions League win shows Rodriguez wearing a ring on her ring finger. According to The Sun, Rodriguez later liked a photo of a ring posted by Cartier. The Sun detailed the potential engagement ring.

Although the pair have kept tight-lipped over a future wedding, the type of ring is the biggest hint yet that the loved-up duo are set to get hitched.

The Real Madrid ace appears to have spared no expense, with estimates suggesting he forked out a whopping £615,000 on the Cartier ring.

There have been rumors since the fall of 2017 that the couple planned to get married after the World Cup. The couple is believed to have met when Rodriguez was working at a Gucci store in Madrid. Ronaldo was attending a Dolce & Gabbanna event there. The couple first went public with their relationship in 2016.

Ronaldo is a proud father of four. Rodriguez gave birth to their only child together, Alana Martina, on November 12, 2017. Twins Mateo and Eva were born through a surrogate. The mother of his oldest son, Cristiano Jr., is unknown. Ronaldo has a long list of accomplishments on the soccer field, but he admits nothing compares to being a father. Ronaldo wrote about his joy of being a dad in a letter for The Players’ Tribune.

Over the past eight years, I have achieved incredible things at Madrid. But to be honest, winning trophies later on in my career has become a different kind of emotion. Especially in these last two years. At Madrid, if you don’t win everything, other people consider it a failure. This is the expectation of greatness. This is my job.

But when you are a father, it is a completely different feeling. A feeling that I cannot describe. This is why my time in Madrid has been special. I have been a footballer, yes, but also a father…

It is a joy that I did not understand until I was a father. There are so many emotions happening simultaneously that you cannot describe the feeling in words. The only thing I can compare it to is how I felt when I was warming up in Madeira and I saw my mother and sister huddled together in the stands.

3. Ronaldo’s Mom, Maria, Admits to Wanting to Have an Abortion When She Was Pregnant with Ronaldo

Ronaldo’s mother, Maria Dolores dos Santos, juggled jobs as a cook and cleaning person to try to provide for her family. Ronaldo came along at a difficult time, and Santos admits to questioning whether she should give birth. Santos spoke about her doubts in the documentary called Ronaldo.

“He is a child that I wanted to abort,” Santos admits in the film (via The Sun). “God didn’t want that to happen and I was blessed because of that and God didn’t punish me. Sometimes Ronaldo makes fun of me and says ‘You didn’t want me to be born. But now you see that I’m here helping all of you.’ And, well, sometimes we have a laugh about that.”

Ronaldo’s mother would get so stressed at soccer games, doctors prescribed her sedatives. Ronaldo spoke about his mother’s anxiety in a letter he wrote for The Players’ Tribune.

When I started playing professionally at 17, my mother could barely watch because of the stress. She would come to watch me play at the old Estádio José Alvalade, and she got so nervous during big games that she passed out a few times. Seriously, she passed out. The doctors started prescribing her sedatives just for my matches.

I would say to her, “Remember when you didn’t care about football?”

4. Ronaldo’s Father Was an Alcoholic & Abusive to His Mother

According to Biography, Ronaldo’s father, Jose Dinis Aveiro, passed away in 2007 from alcohol-related kidney problems. Aveiro drank too much, and became abusive to his mother. ESPN’s Wright Thompson’s detailed the demons Ronaldo’s father wrestled with when he came back from fighting a war in Africa.

We learn that Aveiro went off to fight an unpopular war as a young man, drafted like all eligible men during Portugal’s military dictatorship, shipped off to Africa to try to keep the colony of Angola from winning its freedom. He wasn’t on the side of the victors, just a nation fighting to keep a final piece of a vanishing world. When he got home, he’d changed forever, the movie says. Aveiro drank himself to death and had a strained relationship with his son, and although he never hit his kids, the movie says, he beat Ronaldo’s mother. When his father’s liver failed, Ronaldo paid for him to fly private on an air ambulance to England for medical treatment. It was too late.

5. When Ronaldo Was 16, He Paid For His Brother to Go to Rehab

Ronaldo has two sisters, Katia Aveiro, along with Elma Aveiro. He also has a brother, Hugo Aveiro, who struggled with addiction like their father. Santos explained how she initially sent her son to rehab, and Ronaldo pitched in when he was just 16.

“I paid to send Hugo away to a specialist clinic for treatment,” Santos explained to The Sun. “I was working as a cleaner, earning only £400 a month and I had to take out a loan. Cristiano was 16 then. He was earning more and paid for his brother’s treatment. There’s no doubt his money helped to save Hugo. Things might have turned out a lot differently if Cristiano hadn’t been a footballer.”

Santos noted Ronaldo watched his father die from his addictions, and wanted a different life for himself. Ronaldo tried to help his father get help, but he refused to listen.

“Cristiano has seen what drink and drugs can do to people close to him,” Santos told The Sun. “And it’s part of the reason why he’s become who he is today. Dinis [Ronaldo’s dad] drank himself into an early grave which left Cristiano devastated. Time and again, Cristiano offered to pay to get him treatment but Dinis kept on drinking.” 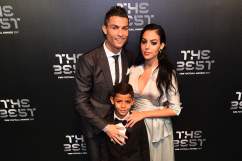