Getty Dustin Johnson is going for his second major.

Dustin Johnson has won a major, and is looking for his second win. Johnson headed into the final weekend of the 2018 U.S. Open with a steady lead on the field, and appears to have a good chance to win his second major. Johnson won his first major at the 2016 U.S. Open, but it is a bit different given it is at a different course each year. After winning the St. Jude Classic last weekend, Johnson admitted that he is targeting that second major victory.

“I feel like right now, my game’s in very good shape,” Johnson explained to Sporting News. “I feel like I got a lot of confidence in it, and I feel like I can play this golf course well. And then, you know, it definitely would be awesome to get my second major.”

Johnson entered the U.S. Open as the favorite to win. In addition to his strong recent form, Johnson does everything well, with no glaring weakness. Given the difficulty of a course like Shinnecock Hills, a well-rounded player like Johnson has a better chance than most to compete. Overall, the U.S. Open has been Johnson’s best major over his career. Johnson has three top-five finishes at the U.S. Open, and that number will likely jump to four after 2018. Johnson has bounced back nicely after missing the cut at the 2017 U.S. Open.

Johnson has 13 top 10 finishes at majors during his career, and here’s a breakdown of those finishes.

Johnson has wrestled with his own demons, which caused him to be suspended from the PGA Tour in 2014. Johnson has taken his career to the next level over the past several years, and has emerged as one of the top golfers in the world. Johnson spoke with CNN about how he has been able to elevate his career.

“I can have someone tell me to do stuff all the time every day and if I don’t want to do it, I ain’t gonna do it,” Johnson told CNN. “It’s got to come from me. Obviously people give me advice and what I should do, but I’m only going to do what I think I want to do. So, it was just time. I was just fed up with, you know, being good. I thought I could be a lot better.”

A win at the 2018 U.S. Open would be Johnson’s third victory of the year, and seventh top 10 finish of 2018. Johnson entered the U.S. Open second in the FedEx Cup standings, and earned $4.7 million so far this year. Even Tiger Woods was impressed with Johnson’s play at Shinnecock given the difficult conditions.

“Dustin was in complete control of what he’s doing,” Woods told Golf.com. “He’s hitting the ball so flush and so solid. I know it’s windy, it’s blustery, it was raining early, but he’s hitting right through it.” 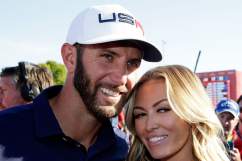 Does Dustin Johnson Have a Wife? Is Golfer Married?

Read More
Golf, US Open Golf
How many majors has Dustin Johnson won? Learn more about Johnson's major history as the golfer goes for his second major win at the 2018 U.S. Open.