Getty Messis future with Argentina is in doubt.

With Argentina’s disappointing start at the 2018 World Cup, it is no surprise that talks of Lionel Messi’s retirement have heated up. Despite the retirement rumors, Messi has been especially vague about his future on Argentina’s national team. Messi’s most recent comments to The Sun indicate he wants to play until he can help Argentina win a World Cup.

It means so much because for Argentina the World Cup is special – and for me too. I’ve always had the dream of watching me raise the World Cup. And then seeing the emotion that goes with it. My hair stands on end just thinking about that moment. It would make millions of Argentines in the world happy. So we cannot give up on that dream. I have won all the most important tournaments but I am ambitious to the end. I would not like to retire from active football without being a world champion with my country.

Messi has enjoyed an immense amount of success over his soccer career, but the World Cup is the one accomplishment that has alluded him. Messi is often compared to Diego Maradona, who helped lead Argentina to a World Cup in 1986. Messi had previously announced his retirement from the national team after Argentina’s disappointing loss in the 2016 Copa America final to Chile. Messi later had a change of heart, and ended up heading to Russia with the team.

Prior to the World Cup, Messi indicated that his national team future would depend on how the team performed in Russia. Messi’s comments to the Spanish newspaper Sport (via the Independent) indicate the pressure from the team has taken its toll on the star over his career.

I don’t know. It will depend how we do, how it ends. The fact we’ve lost three finals now has led to some complicated moments with the Argentine press due to the differences in seeing what it means to reach a final. It is not easy and [reaching three finals] has to be appreciated. It’s true that winning them is important, but getting there is not easy.

Regardless of his decision for the 2022 World Cup and beyond, Messi’s status with Barcelona remains concrete. The question is whether Messi is willing to go through another cycle of criticism and potentially disappointment with Argentina over the next four years.

Despite the criticism, Messi has been able to lead Argentina to relative success, aside from hoisting the trophy. Argentina came in second place in 2014, and made the quarterfinals in their previous two appearances. Messi has five goals over his career in the World Cup, but was looking to find the back of the net for the first time in 2018 heading into Argentina’s final match of group play. 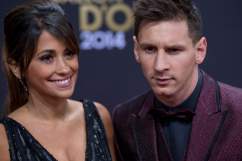