J.R. Smith made a historic gaffe at the end of game 1 in the NBA Finals, sending the meme writers into immediate overdrive (see our top 10 meme list later in this article). In case you were living in a cave and somehow missed it, Smith appeared to have forgotten the score and ran out the clock.

Actually, the game was tied, but, robbed of a final chance to score, the Cavaliers then had to face the Warriors in overtime, and promptly lost. Although extremely frustrating to Cavaliers players and players (and LeBron James), the moment (and James’ reaction to it) was comedy gold.

Although LeBron looked upset on the court, he’s since come to J.R.’s defense. After initially leaving a press conference as reporters peppered him with questions about Smith, LeBron has given a few remarks about his teammate, declaring that Smith has an “uncanny ability to bounce back.” For his part, Smith initially claimed that he knew the game was tied, but later acknowledged, “After thinking about it a lot obviously the last 24 hours or however many since the game was over, I can’t say I was sure of anything at that point.” He initially was overheard possibly saying he thought the team was ahead.

First, before we get to the best J.R. Smith memes, here’s the actual moment in case you haven’t seen it (or want to relive the agony for some reason.)

JR Smith pulled the biggest JR move at the end of Game 1 and set #NBATwitter on FIRE (➡️ @remymartinus) pic.twitter.com/ZhWhZrZDnl

Here are the 10 funniest memes and GIFS about J.R. Smith, LeBron James, and that big Game 1 goof up.

LeBron on his phone… pic.twitter.com/5jiquRxg3v

The real LeBron James has come to the defense of his teammate and has declined to say anything negative about him. That’s not how the meme writers imagined it right after Game 1.

The J.R. Smith memes focused a lot on LeBron’s reaction to Smith’s gaffe. It appears that Drake can’t escape the memes even when he’s not the one everyone’s talking about.

It’s obvious that something was distracting J.R. Smith. Jokesters had fun imagining what it was.

JR Smith had one job! pic.twitter.com/gh73xWNPbt

Like we said, people thought J.R. Smith was distracted.

6. Alcohol in the Hands

LeBron James didn’t really put his hands around J.R. Smith’s neck. That didn’t stop one humorist from imagining it.

Need more LeBron/JR Smith memes. Need. Leave them in this thread for all to enjoy. pic.twitter.com/4KHI8YfqOo

Like we said, those outstretched hands were just asking for memes. Whether it was spaghetti or a myriad of other things, some of the best jokes imagined something in LeBron’s hands.

Some people just couldn’t help it. The temptation to go political was too great. Many fans mocked the sleepy-eyed, sort-of lost look on J.R. Smith’s face after the play. Looking kind of addled didn’t help his cause.

Instant replay of JR Smith and LeBron in the closing seconds of regulation. pic.twitter.com/8qYCv7mBQf

This helped me cope with/ the Cavs loss. But here's to #JRSmith & the Refs not sabotaging any more potential wins!! #WhateverItTakes #NBAFinals
.
Also I think I may be addicted to making memes. ✍??? pic.twitter.com/Q3ScqqTV2o

J.R. might as well have been on the opposing team because he was helping them in the end so much, right? 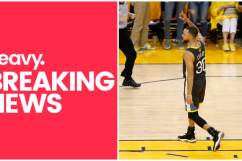