LeBron James free agency rumors tying him to the Warriors have heated up, and it is all thanks to ESPN’s Stephen A. Smith. On the morning of Game 3, Smith reported James will have a “conversation” with the Warriors.

Smith also prefaced his statement by saying “this is not going to happen.” Even Smith is skeptical of his own report. Could James sign with the Warriors? No, not in the team’s current state. As of now, Spotrac projects the Warriors will be $2.6 million over the cap next season. Unless he takes an unlikely discount, James is going to command over $30 million per season. Regardless of James starting salary, the Warriors would have to work out a sign-and-trade out to even have a chance at signing James. It would also mean the Warriors would likely trade Klay Thompson, who is a free agent next summer, and move Andre Iguodala to even have a chance at signing James mathematically.

ESPN’s Chris Haynes reported in February that James would be willing to meet with the Warriors if they can create cap space.

If the Golden State Warriors can create a max salary slot this offseason, the defending NBA champions could position themselves to secure a meeting with LeBron James, league sources told ESPN.

There is no indication that Golden State is evaluating such options to acquire the Cleveland Cavaliers star at this time.

Out of respect for the Warriors’ winning culture, James would listen if Golden State explored ways to clear the necessary cap space, sources said.

When the James to the Warriors rumors first started around the All-Star break, Kevin Durant expressed his skepticism. Here’s how The Washington Post characterized Durant’s feelings.

Don’t count Kevin Durant among those buying into that league-shaking scenario. When asked about the report later on Thursday, the Warriors forward literally called “bulls—” on it.

Twice, in fact. However, Durant then went on to point out that “just like a couple of years ago,” when “nobody would have thought” that he himself would have wound up with the Warriors, many “crazy things have happened” since he arrived in the NBA.

Durant’s situation was a bit different in that the salary cap took a massive jump. The Warriors also had three stars at the time rather than its current setup of four. Durant expressed his frustration with the constant free agency media story lines in an interview with The Mercury News.

“It’s not interesting because you turn on TV, you turn on anything that has to do with basketball, there’s less about the game,” Durant explained to the Mercury News. “…As a pure basketball player, as a pure fan of the game, at this point, it’s pretty sickening…LeBron James is the biggest name in basketball. For the last two years everybody been wondering where he’s going to go and if he’s unhappy in Cleveland, so I understand that part. It’s fun to see that suspense. But we’re getting away from the real game. We’re getting away from what really matters. And that’s just playing ball and getting better and enjoying the game.” 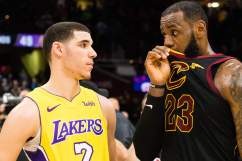