Getty LeBron James and wife, Savannah James, have been together since high school.

Long before LeBron James was one of the best athletes on the planet, his wife, Savannah (Brinson) James has been by his side. The two started as high school sweethearts, and are now the proud parents of three children. Aside from a few social media posts, Savannah prefers to stay out of the spotlight.

Actress Gabrielle Union is one of the couple’s closest friends, and has gotten to know them well since LeBron was a former teammate of her husband, Dwyane Wade. Gabrielle describes LeBron as silly, and Savannah as having a strong work ethic.

“Me and Dwyane, our biggest takeaway about Savannah and LeBron is that they’re real,” Gabrielle explained to Vogue. “What you see is exactly what you get. You think, Oh, my God, LeBron is silly and jumps around, and you know? That’s who he is. Who is Savannah, for people who don’t know her? She’s a woman who really has that midwestern ethic. And I’m from the Midwest, so I know this. It’s that you say what you do and you do what you say.”

The life they have now is not what Savannah expected, as she never thought LeBron would become one of the greatest basketball players of all-time. She expected his legacy to be one of the top players in his area, and his ascent into one of the most recognizable athletes in the world has come as a surprise.

“I just thought he’d be a hometown hero for his era and it would be over,” Savannah explained to Harper Bazaar. “He was a normal high school senior.”

LeBron and Savannah can now eat at any restaurant they want, but the couple initially got to know each other at two chain restaurants. According to Cleveland Magazine, the couple first hung out with a group of friends at Applebee’s after one of LeBron’s high school games. Their first official date would come a little later at Outback Steakhouse.

It was LeBron that first showed interest in Savannah, but she did not want to talk to him initially. A friend asked her if she could give LeBron her number, but Savannah declined choosing to take LeBron’s number instead.

“I’m like, ‘Um, nope. I’ll take his number,’ ” Savannah told Cleveland Magazine. “One day I’m sitting around — I was probably bored or something — and I’m like, ‘Oh, I forgot! I have this number for this guy that I can call. He seemed interested, so let’s see.’ ”

2. Savannah Started a Program in Akron Called Women of Our Future Where She Works to Support High School Girls

When you and your better half are featured in The September Issue of @voguemagazine on their 125th year anniversary… Wow!! Many thanks!!!!#WordsCantDescribe #WhenYouJustDoYou #BeHumble

Savannah has consistently tried to use her platform to better the lives of others. Savannah’s newest venture is called Women of Our Future where she mentors 16 different high school girls at her former Akron high school, Buchtel. Savannah spoke with Vogue about the inspiration for the project.

“When I was growing up, my mom took in three or four kids just because they needed a place to go and be safe, to eat,” Savannah explained to Vogue. “These are my friends; these are my cousins. These are people who I was extremely close to and still am now; these are the kids of neighborhood kids who we saw every day at school. And if they just have the right push.”

Here’s how a press release from the LeBron James Family Foundation explained the vision for the program.

The empowering initiative aims to inspire, uplift, and support young Akron women through research-based and volunteer-driven interventions. The program will offer local high school girls one-on-one mentoring, academic support, and constant encouragement as they pursue their educations. The initiative’s inaugural group includes 16 young women from Mrs. James’ alma mater, Buchtel CLC, who have been individually paired with a mentor. Working with the iCare Network, Women of Our Future has a structure in place for sustained mentorship.

3. LeBron Calls Savannah the “Boss” of the Household & Admits There Is “No Book” on Being a Great Parent

The travel schedule of an NBA player means there are weeks where LeBron is not home at all. LeBron is cognizant of this, and defers to Savannah when setting the tone for their three children since she is home everyday. The couple has two sons, LeBron Jr. (13) and Bryce (10), and a daughter Zhuri (3). LeBron emphasizes each family has to come up with a plan that works for them.

“No book that can tell you about parenthood,” LeBron explained to Vogue. “Even your mom, your dad, your grandparents—they can give you pointers, but you have to go along that path on your own because every kid is different; every situation is different. Me and my wife are different, but at the same time we’re the same. I’m gone a lot, so she is the boss of the household; she’s the rule-setter. It’s hard for me to go on the road for two and half weeks and then come home and tell my kids, ‘Look, this is how it should be done’ when she’s been home every day.”

??Wit my heavy hitta aka The Queen ?? post game last night! We ride and die together #JamesGang?

In an interview with Cleveland Magazine, Savannah noted that LeBron lives up to his nickname of “King James” when it comes to how he treats her and their three children. Savannah admits to feeling like a queen, but noted LeBron treats everyone the same way.

“He is truly a king to his queen, if you will,” Savannah explained to Cleveland Magazine. “He treats me with so much respect — I mean, it’s hard to not love him, with the way that he is with me and the kids and his mom and just everyone who’s around him. He’s a really, really humble guy for everything that he has and everything that he’s done.”

5. Savannah Found Out She Was Pregnant With LeBron Jr. Her Senior Year of High School

While the couple’s children have become so much a part of LeBron and Savannah’s life, there was a time when things looked foggy. According to Harper Bazaar, Savannah found out she was pregnant with their first child when she was a senior in high school, and during LeBron’s NBA rookie season. Savannah initially worried about what she would tell her parents.

The baby would turn out to be LeBron Jr., who is now 13. LeBron’s son has become quite the baller, and already has offers from a number of top schools including Duke and Kentucky. Here’s a look at some of LeBron Jr.’s top highlights. 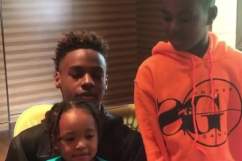