Getty Luka Doncic is headed to the Dallas Mavericks.

For weeks, we have heard DeAndre Ayton is locked in to the Suns with the No. 1 pick, but our latest NBA mock draft explores every pick in the draft. Our mock goes through both rounds of the draft as we rundown the potential hidden gems going in the second round. With the Suns decision locked up, the buzz has been around the Kings decision between Marvin Bagley and Luka Doncic. The latest reports have the Kings sticking with Bagley, who has been the favorite in the weeks leading up to the draft.

With multiple first round picks including the No. 3 selection, the Hawks have been linked to a lot of trade rumors. Doncic is expected to go No. 3, but the question is whether Atlanta will make the pick for themselves, or another team will move up to grab the Real Madrid stud.

From there, the question is whether Oklahoma star Trae Young will slide, with some expecting him to fall because of his slight frame. Michael Porter Jr. is another wild card with rumors having him going as high as No.2. All this leads to what many expect to be an active trade market, which could make this draft one of the more entertaining drafts in a long time.

Heres a look at my final mock draft. 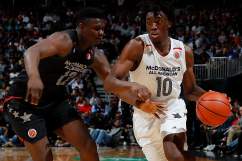