Sloane Stephens comes from a family of athletes. Sloane’s mom, Sybil Smith, was a standout swimmer at Boston University where she still holds seven school records. Sloane’s dad, John Stephens, was a running back for the New England Patriots. According to Sports on Earth, the couple divorced when Sloane was an infant. Sloane also has a brother, Shawn Farrell, who missed out on watching his sister play in the 2018 French Open final, because he lost his passport.

“No, I wouldn’t let him come now,” Sloane explained to Baseline. “Are you kidding me? He missed his opportunity. He asks me all the time and I always say no anyway. So the one time I say yes, he loses his passport. That’s ridiculous. He’s not coming. You’re not going to see him. Don’t worry.”

After Sloane won the 2017 U.S. Open, she spoke about the importance of parents.

“I think any parent that ever supports their child — you could be me one day,” Sloane explained to USA Today. “So parents, never give up on your kids. If they want to do something, always encourage them.”

1. Sloane’s Mother, Sybil, Became the First African-American Woman to Be Named a First-Team All American Swimmer

Sybil had a legendary swimming career at Boston University. According to The Undefeated, Sybil is widely regarded as Boston’s top swimmer in school history, and holds seven school records. Sybil was the first African-American woman to be named a first-team All-American swimmer. She was inducted into the Boston University Hall of Fame in 1993. After winning the 2017 U.S. Open, Sloane credited her mother for the win.

“We’ve been on such a journey together,” Sloane told the USA Today. “My mom is incredible. I think parents don’t get enough credit. When I was 11 years old, my mom took me to a tennis academy. One of the directors there told my mom that I’d be lucky if I was a Division II player and I got a scholarship.”

2. Sloane’s Father, John, Played in the NFL for the Patriots, But a Dangerous Collision Changed His Career

Sloane Stephens, is one talented Tennis Player….
One win away from the French Open finals.
( her father John Stephens was an NFL running back) pic.twitter.com/J13p3UitNc

According to Sports on Earth, Sloane’s father, John, won 1988 Rookie of the Year and made the Pro Bowl as a Patriots running back. John rushed for 1,168 and four touchdowns his rookie season. John spent six seasons in the NFL, but his production dropped off every season. John played five seasons with the Patriots before playing on three different teams (Falcons, Packers and Chiefs) in 1993.

During his second NFL season, one play would alter the rest of John’s career. Sports on Earth described his collision with Jeff Fuller that would leave Fuller without the use of his right arm.

There was a collision. Fuller and Stephens collapsed to the turf. Fuller didn’t get up. He had no sensation in his body. He couldn’t move. Players on both teams dropped to their knees. Some said a prayer. Berry called the scene “tragic, one of the worst things I ever saw on a football field.” Fuller was airlifted to a nearby hospital, where he remained totally paralyzed upon arrival, until he began to slowly recover feeling in his body. He never regained use of his right arm, though, which sits in a sling today, some 15 years later, a constant reminder of a fateful meeting with Stephens…

“He was always afraid of hitting someone that hard again,” said David Pickings, a friend who spoke to Stephens regularly. “He told me it bothered him and it was on his mind every game. He was running not to hurt somebody. He said he couldn’t run the same anymore. Next time, he said, it could be someone else. Or it could be him.”

In a season that we're celebrating 50 yrs of Patriots memories, the death of 43yr old John Stephens is tragically sad. http://bit.ly/nwuHB

Sloane’s father died in a car accident on September 2, 2009. According to NESN, John lost control of his pickup truck on Louisiana Highway 169 near Shreveport, and the vehicle struck some trees. John was not wearing a seatbelt, and was thrown in the collision.

“It appeared Stephens lost control and tried to overcorrect his steering, causing him to cross back over the road and hit the trees,” the sheriff’s office told NESN.

According to The New York Times, the collision was ruled an accident with no sign that it was intentional. Sports on Earth described the scene of the accident.

Four years ago, when police arrived on the scene of a fatal accident along a quiet road just west of Shreveport involving one vehicle and one man, who happened to be facing serious charges and the rest of his life behind bars, the Ford F-250 was just about totaled. Inside they found, among other items, a few opened beer cans, an ice chest. And a tennis ball.

4. John Pled Guilty to Rape Charges in 1994 & Had Pending Sexual Assault Charges at the Time of His Death

According to The New York Times, John was arrested in Missouri in 1994 and pled guilty to rape charges. There were additional sexual assault charges pending at the time of his death. Sloane’s relationship with her father was complicated as they did not begin speaking regularly until she was 13, and began a three-year relationship after John reached out to his daughter after learning he had a degenerative bone disease.

“He was very sick, and that was pretty much how he came back into her life, so she could know her dad before he died,” Sybil told The New York Times.

Sloane did not know about her father’s legal history until after his death which complicated the grieving process.

“I wanted her to have pride in him, I’m telling you, John was a very good man with addiction issues that were never addressed early on,” Sybil explained to The New York Times. “She said, ‘Mom, why didn’t you tell me this?’ It’s very sad, because Sloane and her dad became so close. They had a great friendship. She knew a part of her dad that was all good and she was able to be proud of him.”

Sybil’s accomplishments extend far beyond athletics. According to Sports on Earth, Sybil attended graduate school at Harvard, and became a psychologist. She used her platform to encourage minority youth to learn to swim. After NBC aired a documentary called “Black Athletes: Fact and Fiction” in the late 1980’s, Sybil wrote an article for Sports Illustrated about the documentary, and the challenges of being a trail blazer as a swimmer. Here’s an excerpt from the column courtesy of Sports on Earth.

Long before the show had gone off the air, I was in tears. At times I couldn’t even watch it. The show caused me to recall my experiences as a black athlete in a predominantly white sport. Although blacks supposedly can’t swim very well — remember former Dodger vice president Al Campanis’ ridiculous remarks about our lack of buoyancy — all too often I heard about the supposed physiological advantages black athletes had over whites.

Some of my closest friends on the team had rationalized my accomplishments by saying, ‘You’re so lucky that you don’t have to work that hard,’ and, ‘[Swimming] is so natural for you.’ Their words hurt, but I transferred to my pain into a personal mission and became the first All-America swimmer in BU history. 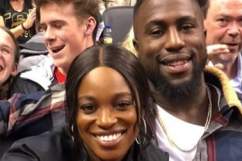