Thompson and his ex-girlfriend, Jordan Craig, a fashion and lifestyle blogger, dated from 2014 through 2016. Soon after the two broke up, Craig found out she was pregnant.

There were rumors that Thompson cheated on Craig with his current girlfriend, Khloe Kardashian, but Craig was quick to clear up that gossip and set the record straight. She and Thompson had already broken up when he started dating Kardashian, which debunks the reports that he left his pregnant girlfriend for the reality star.

Craig gave birth to Prince in December 2016. According to TMZ, she did not list Thompson as the father on Prince’s birth certificate, most likely because Thompson was not present at the time of his son’s birth. According to the law, he would have had to be present at the hospital in order for to have his name added to the document.

Thompson started dating Kardashian in 2016, after being set up with her on a blind date. The two hit it off and quickly fell in love. Last year, Kardashian announced that she and her basketball beau were expecting their first child together.

“My greatest dream realized! We are having a baby! I had been waiting and wondering but God had a plan all along. He knew what He was doing. I simply had to trust in Him and be patient,” Kardashian posted on social media. In her third trimester, Kardashian found out that Thompson had been cheating on her.

A few days later, Kardashian and Thompson welcomed their daughter, True. The baby was born in Cleveland on April 12, 2018.

Thompson is a very private person when it comes to his children. However, he opened up about his newborn daughter in an interview with Richard Jefferson and Allie Clifton on the UNINTERRUPTED’s Road Trippin’ podcast last month.

“Baby True is eating, sleeping and, uh, sh*ing. That’s all they do,” Thompson said, adding that his daughter was “doing good.”

“She has a full head of hair. She has green eyes. This is the first girl Thompson, female Thompson, so it’s huge,” Thompson said. “I think with a girl, you’re just so much more emotionally like… with a boy, it’s just like, ‘Hey man, you’ll be all right man. Stop crying. But [with True], it’s like, ‘True, it’s gonna be okay. You know, we’re right here. Daddy’s here to feed you. It’s me! Look, yeah!’ It’s way different, but it’s fun, though. It changes you,” he explained.

Neither Thompson nor Kardashian have addressed his cheating scandal publicly. And while Kardashian has shared a handful of photos of baby True on social media, Thompson has never shared a pic of either of his children. 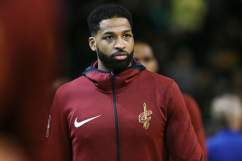