Buffalo Bills icon Jim Kelly began his battle with oral cancer in 2013. After surgery, radiation and chemotherapy, he was declared cancer-free in 2014. Unfortunately, his cancer has returned and he announced the news in March 2018. In recent months, he underwent more surgery and had his jaw reconstructed, which affects his speech. Because of his determination and strong fight against cancer, Jim has been honored with the Jimmy V. Perseverance Award at the 2018 ESPYs.

According to WXXI News, when Jim was first battling the disease, his wife, Jill, took to Imgur.com, and wrote that her family was having a “more serious battle under our roof” and she asked followers to pray for her husband “for healing”. Jill kept fans in the know, updating them with his cancer battle throughout his journey.

Currently, Jim Kelly resides in East Aurora, New York with his wife and their two daughters – Erin and Camryn. The couple also had a son, named Hunter James Kelly, who was born on February 14, 1997. Like Hunter, Jim was also born on Valentine’s Day, according to ESPN. Sadly, Hunter was diagnosed with globoid-cell leukodystrophy, also known as Krabbe disease, which is a fatal nervous system illness. Hunter died from the disease, at just 8 years old, passing away on August 5, 2005, as reported by ESPN.

#TBT Thinking about this brave one today…as our foundation prepares for the Hunter’s Hope Family/Medical Symposium next week. I am forever grateful for every moment with Hunter, and the countless lives God changed and continues to change through his life and legacy. Amazing! God works everything together for good!

When Hunter passed away, the Kelly family made the announcement in a press release from the Kelly for Kids Foundation, which read, “Hunter James Kelly entered Heaven this morning, Friday, August 5, 2005. Hunter, the beloved 8½ year old son of Hall of Fame Quarterback Jim Kelly and his wife Jill, staged a valiant life-long battle with Krabbe Leukodystrophy. Hunter was the longest living survivor of infantile Krabbe disease and served as an inspiration to thousands of other children and their families. The Hunter’s Hope Foundation was founded in his name to fund research into the fatal disease and to offer hope and support to its victims worldwide … Jim and Jill Kelly remain grateful for your continued prayers and support and ask that you respect their privacy as they mourn the sudden loss of their beloved son and offer comfort to his sisters Erin and Camryn.” 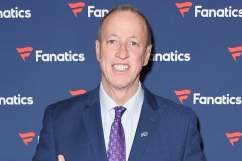 Jim Kelly’s Cancer 2018 Update Ahead of His ESPYs Honor

Jim and Jill have founded several organizations and events in honor of their son, including Hunter’s Hope, the Hunter James Kelly Research Institute and Hunter’s Day of Hope. When Jim Kelly was inducted into the Pro Football Hall of Fame in 2002, his speech was dedicated to his late son. Jim stated in his speech, “It’s been written that the trademark of my career was toughness. The toughest person I ever met in my life was my hero, my soldier, my son, Hunter. I love you, buddy.”

Thinking about blessings and happier moments on this #HusbandAppreciationDay Heavenly Father…for the joy and love in these moments and the amazing man I get to call my husband…THANK YOU!

Recently, Jim and Jill celebrated the wedding of one of their daughters and celebrated their own anniversary on May 18, 2018. In a sweet Instagram post, Jill wrote, “22 years and we’re just getting started. Happy Anniversary to my husband and my hero! Every minute, every blessing, every struggle, every tear, every joy and triumph … we did it together. And together is how we will continue to live this life … I love you Jim!”

22 years and we’re just getting started.❤️ Happy Anniversary to my husband and my hero! Every minute, every blessing, every struggle, every tear, every joy and triumph…we did it together. And together is how we will continue to live this life… I love you Jim!