Ronaldo has moved to Juventus for a fee of $140 million. The move, which seemed inevitable, was confirmed on July 10, according to Sky Sports. Fresh from his World Cup second round exit, rumors had swirled that Ronaldo was expected to swap La Liga for Serie A. The striker is 33 years old.

In April 2018, Ronaldo received an extremely warm reception in Turin when his overhead kick led Madrid to a 3-0 victory over Juventus in the Champions League. The player was applauded off the the field by opposing fans. The BBC’s Pat Nevin who was announcing on the game said, “When the ball comes across to him you think: ‘Oh, you’re not going to try an overhead kick.’ And then, bang! Just see it, watch it.”

Ronaldo joined Real Madrid from Manchester United in the summer of 2009 for a then-world record $105 million. Sky Sports had earlier reported on July 10 that his agent, Jorge Mendes, was in Greece to meet with Juventus president Andrea Agnelli over the move. Spanish soccer expert, Guillem Balague, had earlier told Sky that it was his understanding that Ronaldo had made it clear that he wanted to leave Madrid for Juventus.

The transfer means that Ronaldo is now Juventus’ most expensive ever player, eclipsing the close to $100 million they paid Napoli for Gonzalo Higuain in 2017. Marca in Spain reports that Juventus may look to sell Higuain in order to afford the Ronaldo deal. 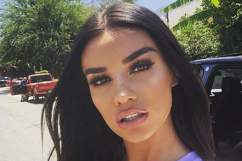