Hard Knocks Episode 2 kicks off tonight at 10 p.m. Eastern as HBO documents the Browns training camp and preseason. Episode 1 gave us an inside look at Cleveland coach Hue Jackson as he mourned the deaths of both his mother and brother within weeks of each other, all while the Browns were starting training camp.

Jarvis Landry also emerged as one of the stars of the show. His fiery speech to his fellow wide receivers went viral, and Browns fans are hoping his leadership can help the team turn things around this season.

HBO does not give us a lot in the trailer, but there are a few things viewers can expect based on what we know. Here’s what Hard Knocks Episode 2 is expected to focus on.

Corey Coleman Gets Traded to the Bills

One of the first images in the trailer is of Corey Coleman getting traded to the Bills. It was a bit of a shocking deal given how young Coleman is combined with the Browns only receiving a seventh round pick in return. Cleveland obviously was not fond of Coleman, but it is unclear exactly what the issues were.

At the end of episode one, we saw Coleman meeting with the Browns. Hopefully, we will get to hear some of the dialogue about the trade during Episode 2.

Baker Mayfield made his preseason debut last week against the Giants, and it looks like he was mic’d up during the game. There was plenty of Mayfield in the first episode, including his big decision on the RV rental that functions as the Browns quarterback room.

Rookie receiver Antonio Callaway has been a big topic of discussion. Callaway was pulled over and received a citation for marijuana, which the receiver claimed was from his brother using the car. The Washington Post detailed the incident.

When asked in the video, which was first posted Wednesday by TMZ Sports, why he had the backstrap to a Glock in the car, Callaway replied that he has such a gun, “but it’s in Florida.” A native of Miami, Callaway played at the University of Florida before the Browns made him a fourth-round selection in April’s NFL draft.

Callaway, who also was cited for driving with a suspended license, told officers that his car had just been shipped north from Florida, and he denied having smoked any marijuana. Officers said in a police report (via cleveland.com) they smelled the substance when they pulled the 21-year-old over for a traffic violation just before 3 a.m. Sunday in Strongsville, Ohio, and after he agreed to let them search his car, they found a small amount of marijuana under a seat.

Callaway’s “punishment” was to play the majority of the Browns first preseason game, which was widely criticized by fans and media members. It will be interesting to see if HBO features the Browns discussing Callaway, and how to handle the incident.

HBO put the entire first episode on YouTube for free for anyone to watch. The show will require a subscription moving forward, but fans can watch Episode 1 on the above video. HBO is also offering a free trial for HBO Now, which allows you to watch HBO for free on your mobile devices for an entire month. Click here to learn more about your Hard Knocks streaming options. 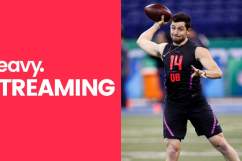