Getty Deshuan Watson had his season ended by a torn ACL in 2017, and makes his return to the field Thursday.

The NFL is back, and there are options.

Last week we just had the Hall of Fame Game. Now the doors have been blown off, with 12 games taking place tonight. With so many changes and the majority of the league in action, it’s hard to decide what to watch. Combined with the fact that the majority of preseason action is uninteresting to the masses, it might be necessary to make a handy viewing guide.

Make a snack, ignore the calls to go out, and follow this NFL viewing guide for tonight. Football!

We’ve got one more hour until NFL action kicks off, and the pregame coverage will be awful with nothing to talk about. That makes it the perfect time to catch up on Hard Knocks, which aired its season premiere on Tuesday. Watch Jarvis Landry’s speech, check out the Browns QB RV, and get hyped for preseason action. By the time you’re done, it’ll be time for football.

Double down on the Browns! The stars of Hard Knocks make their preseason debut against the Giants, and the game will be televised nationally on NFL Network. It’s a meeting of top rookies, as Baker Mayfield and Saquon Barkley make their NFL debuts. Both teams are also showing off new offenses, as both teams shook up their coaching staff after disappointing seasons.

Eight of the 12 games start in this hour, so there should be little downtime. Honestly, Red Zone should start Thursday night. I need my QuadBox fix. While the aforementioned game is in break, check out Derrius Guice make his debut as Washington take on New England, who will be developing backup quarterbacks after trading two last season.

If Tyrod Taylor starts for the Browns, this is Baker time. The number one overall pick is already the best part of Hard Knocks, but his critics will be watching his play close in the opener.

If he’s not out there, flip over to Rams-Ravens to get a second look at Lamar Jackson. We saw our first glimpse of the former Heisman winner last week, but Jackson should continue to compete with RG3 for the Ravens backup spot. It’s also worth checking out the matchup, as the Rams added several key pieces on defense during the offseason.

Bills-Chiefs starts at 8:30, and it’s my favorite matchup of the evening. There’s excitement on both sides under center, as Deshaun Watson returns from injury for the Texans and Patrick Mahomes makes his 2018 debut as the Chiefs starter. Mahomes could have to contend with J.J. Watt early, who is returning after missing nearly all of last season with a back injury.

Did you forget that the Bills went to the playoffs last year? I bet you did. They’ve got an interesting QB battle to settle in camp, where former Bengal AJ McCarron
has a slight lead over rookie Josh Allen in the depth chart. Nathan Peterman is also in the bunch, and could even start when the Bills host the Panthers. If Peterman starts, we’ll see Allen third, and that’s why this time slot is perfect.

Usually we don’t see All-Pro quarterbacks in the preseason opener, but the case of Andrew Luck is quite different. We haven’t seen him throw in a regulation game since 2016, and the Colts QB is finally ready to return tonight against the Seahawks. It’s also worth watching for Seattle, as the team is still undecided at running back despite moving up in the draft to select Rashaad Penny.

The last games start at 10, but I’m very interested in watching the skill position players in the offenses of the 49ers-Cowboys game. The second year is supposed to be when players take a leap in Kyle Shanahan’s system, making it a crucial time for San Francisco’s offense. That creativity isn’t found on the Dallas sideline, but the team is in desperate need of an emerging star at receiver or tight end. The team is without staples Dez Bryant and Jason Witten, leaving targets on the table for a young group of pass-catchers. 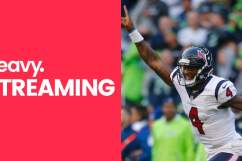 How to Watch NFL Preseason Games Online Without Cable [2018]