Hue Jackson’s name might be on the foundation, but his wife, Michelle Jackson, is a big reason the organization exists. According to their website, the Hue Jackson Foundation aims to “support efforts to combat human trafficking in Cleveland.” Michelle is listed as the foundation’s co-founder, noting her family has been impacted by the cause.

The foundation just partnered with the Salvation Army to build a 12-person facility to house victims of human trafficking in the Harbor Light Complex located near downtown Cleveland. Hue spoke with ESPN about why the couple is so passionate about the cause.

“Michelle and I are very excited about the opportunity to assist survivors of human trafficking by helping to provide a place of respite,” Jackson said in a statement released to ESPN. “This ribbon cutting ceremony is more than a formality. It is a signal to the community we hope to help that there is a safe place to go and there are people who care.”

The Couple Has 3 Daughters

According to the foundation’s site, Michelle and Hue met in college back in 1986, and got married in 1995. The couple has three daughters: Jordyn, Baylee and Haydyn. Michelle’s bio explains that sexual exploitation has impacted her family, and she wanted to do something to give back.

The Issues that surround sexual exploitation have touched her family, just as it has impacted countless other families. The impetus to start the Hue Jackson Foundation came from a need to understand the long-term effects of trauma, not only for the victim, but also for the people who love them. In continuing to learn more about Human Trafficking, Michelle hopes to help other families in their own process of healing.

One of the things the Hue Jackson Foundation is doing to help is partnering with existing organizations to try to do as much good as possible. The foundation detailed the new Cleveland facility that serves as a safe space for up to 12 adults who are human trafficking survivors.

This residence is approximately 4,500 sq. ft. and provides a safe environment for up to 12 recovered adult survivors of human trafficking. It offers collaborative and holistic services, and provides shared office space for law enforcement, healthcare, and social services providers, to help assist these survivors on their road to recovery.

Ohio is currently ranked 4thin the nation for the number of reported cases of human trafficking. Most people think it only happens in third-world countries or in America’s largest cities, but it’s happening right here in Northeast Ohio and in a big way. Tragically, one of the largest groups that are being targeted are children between the ages are 12 to 14.

This effort, to aid in the recovery of human trafficking victims, is the result of a partnership in mission between The Salvation Army and the Hue Jackson Foundation. 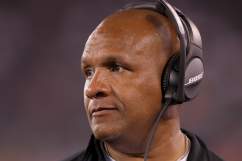