Update 2:17 p.m. ET: Ian Rapoport tweeted that the injury may not be so serious. He is hearing that the injury is an AC joint/shoulder bruise, which would be a huge relief for Doctson and the team. Official word from Washington is not supposed to come until Thursday.

The Washington Redskins entered training camp expecteing the best from Josh Doctson. Now it appears they may be fearing the worst.

According to inside sources within the organization, the Redskins are afraid Doctson may have broken his collarbone on Wednesday. Doctson left Wednesday’s practice early, and the team reported that he was being evaluated for a shoulder injury.

According to those at training camp, Doctson left the field holding his arm after landing hard on the turf. Here is corner Josh Norman explaining the incident:

Josh Norman on the Josh Doctson injury play. Told me on the side he fears Doctson "jammed" his shoulder. pic.twitter.com/SeCaaaIXRW

Doctson tweeted out that he was ok, but no official news has been released.

This was expected to be a breakout season for the former 22nd overall pick. After injuries derailed his rookie season, Doctson scored six touchdowns on only 35 catches last season. He flashed the speed and maneuverability that made him a top prospect at TCU, but didn’t have rapport built with QB Kirk Cousins. Now that Cousins has been replaced by veteran Alex Smith, there are high hopes for Doctson in 2018.

Washington Post writer Rick Snider noticed this weekend that Smith was throwing Doctson open, something Cousins was hesitant to do. Head coach Jay Gruden added that while one receiver might not dominate targets, Doctson has tremendous situational value.

“..The way we spread the ball around..it’s going to be hard for one guy to have a fantasy football superstar year. I think in the red zone is where he’s is going to be most dangerous … and some tight window throws on third down.”

That vision could be obscured by Wednesday’s news. If Doctson does indeed have a broken collarbone, he could start the season on the PUP list, and could easily miss the first month of the season. It would be an unlucky break for Doctson, but the silver lining is that the injury happened early enough that his season isn’t lost. The problem is that this is the critical time to develop chemistry with Smith, who has already raved about his connection with Jamison Crowder.

This is an ongoing story, and will be updated when the extent of the injury is officially revealed. Washington’s preseason debut is in eight days against the Patriots. 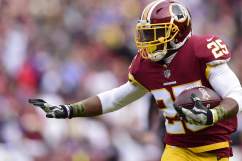