The final major of this year’s golf season is the PGA Championship, which will be held next week from August 9 to August 12. The tournament will be played this season at the Bellerive Country Club in the St. Louis, Missouri, area. Justin Thomas will look to defend his title against a field of the top players in the world.

According to PGA.com, coverage of the tournament will be aired on TNT and CBS starting on Thursday afternoon. The tournament will be on TNT from 2 p.m. to 8 p.m. on Thursday and Friday, with live streams of featured groups and featured holes on the PGA.com starting at 8:30 a.m. on those days. On Saturday and Sunday, TNT will air coverage from 11 a.m. to 2 p.m., and CBS will take over coverage from 2 p.m. to 7 p.m. (or the end of the round).

Bellerive is located in Town and Country, Missouri, and has been open since 1897. The current course was opened in 1960 and was designed by Robert Trent Jones, according to the country club’s website. The club has made major changes over the past several years in advance of the PGA Championship:

The course underwent a major renovation in 2006 led by Rees Jones, the son of Robert Trent Jones, Sr. to provide Noticeable changes include the tree removal and lake construction on #2, making the hole one of two potentially drivable Par 4s (with the changes to #11), the straightened 618 yard Par 5 Eighth Hole, and the picturesque 482 yard Par 4 Twelfth Hole.

In 2013 Rees Jones, facilitated additional course modifications. These modifications included a complete reconstruction of the bunkers and the installation of a unique championship bunker sand. Turf lines throughout the course were also modified. These changes predominately were around bunkers, creek edges and at all putting surface complexes. The modified design increased the aesthetics and introduced new playing challenges coupled with enhanced vistas and sightlines, Bellerive’s progressive modifications have added to its historic legacy and national championship appeal.

As with the original design, the difficulty of the course is best demonstrated by holes 14 through 16, known as “the Ridge.” All of the holes on “the Ridge” play into the prevailing southerly wind. Hole 14 is the last of Bellerive’s strategic 4 par. Hole 15 (495 yards) and 16 (235 yards) are long but straight forward challenges.

Jordan Spieth, who has extended family in the area, told the St. Louis Post-Dispatch about playing at Bellerive next week, “I’m looking forward to it. I haven’t been in St. Louis in about 10 years, and I’ve never played the golf course. So it’s going to be a fun week.”

At the PGA Championship media day in June, Thomas, flanked by the Wanamaker Trophy, told reporters, “It’s a great course. You can tell — it’s a great driving golf course. Driving is going to be premium.”

Thomas added, “The holes are — have great shape to them. A lot of them kind of go out and then dogleg and then kind of are still aware if you’re going to want to challenge it to go farther up you’re going to really need to be precise, so it’s like, I’m going to need to hit 3-wood here or — a great example would be like, I felt like 10 or like 18 where you kind of want to hit it out to the dogleg, but then if you get a little help or you get a little downwind, if I want to challenge that, my area to hit it in is going to be a lot smaller, where I’m going to have the reward of having maybe a wedge or 9-iron as opposed to a 7- or 6-iron, but coming into greens this severe and with this many tears and slopes, shorter putts are going to be a big advantage. It’s definitely going to be a lot of practice on the drivers and 3-woods.”

You can see the tee times for the 2018 PGA Championship here. 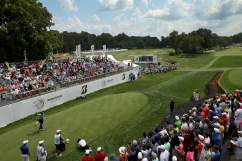 WGC Bridgestone Purse: How Much Prize Money Does the Winner Make?

Read More
Breaking News, Golf, PGA Tour
The PGA Championship is the final major of the PGA Tour season and is held each year in August. Here are the dates for the 2018 tournament and details on where it will be played.