SummerSlam 2018 has come and gone. There were several titles matches set, and several new champions were crowned. Check out the final results below.

Highlights: Both Ziggler and Rollins were intent on drawing blood, and waste little time delivering some devastating hits. Ziggler gains the upper hand early on, knocking Rollins in the chest and eventually sending him out of the ring. He manages to nearly pin Rollins several times. The latter breaks the pin and they both get knocked outside of the ring. Rollins takes the momentum and knocks Ziggler around, and while the latter puts up an amazing fight, Rollins manages to come out the victor.

The Bludgeon Brothers (c) vs. The New Day

Highlights: The match shifts back and forth in terms of momentum, but The New Day manages to gain the upper hand in a crucial moment, as Big E slams Harper off the side of the apron and tags Xavier Woods in to hit massive elbow drop on the floor. They set up to hit Harper with the Midnight Hour, but Rowan knocks Woods off the top rope to cause a disqualification.

Highlights: Braun Strowman smashes Kevin Owens in the corner right as soon as the bell gets rung. Owens scrambles outside the ring, but Strowman follows him and runs him over with a hard shoulder tackle. He picks Owens up and powerslams him for the pin. This is about as one-sided as a match can get.

Carmella vs. Charlotte vs. Becky Lynch

Highlights: This brutal three-way match was a marathon of endurance. Carmella, Becky Lynch, and Charlotte were each ruthless in their attacks, but Charlotte proved to be the toughest competitor tonight, as Carmella gets knocked out the ring by Lynch, who in turn gets hit with a Natural Selection for the pin. Charlotte is the victor. Lynch hugs her friend, but she then levels her with a hard right and whips her into the barricade before leaving. Charlotte is left dazed on the floor.

Highlights: Samoa Joe gets lots of hard hits early on, driving Styles into the steel steps and then grabbing a microphone to tell Styles’ wife that he won’t be coming home tonight. The mockery sets Styles off, however, and he spears Joe into the announcer’s area. He starts attacking everyone at ringside before grabbing a chair and savagely attacking Joe. He eventually gets disqualified to give Joe the win.

The Miz vs. Daniel Bryan

Highlights: After some vicious hits by The Miz, Daniel Bryan hits the flying knee off the apron followed by a dropkick. The Miz bounces back, however, and uses a foreign object to punch Bryan in the face. He scrambles into the ring after getting tossed and manages to get the pin. A truly unpredictable match.

Highlights: Corbin is visibly shaken as the bell rings, and Balor proves that he has every right to be by nailing him with a dropkick. He hits Corbin with a sling blade and another running dropkick before climbing up and hitting the Coup de Grace for an easy win.

Highlights: A far more exciting match that the one that preceded it. Both Nakamura and Hardy give their all, with the former nailing a Twist of Fate after another. Hardy is able to fight back with a Twist of Fate of his own, but Nakamura proves too fast for him and hits the ground hard. Nakamura rolls him back in the ring and hits Kinshasa for the pin.

Highlights: Alexa Bliss only gets in a few hits before Rousey starts her attack. She unloads on her oppnent with body shots before tossing her around and applying the armbar. Bliss’s elbow bends back due to her being double jointed. Rousey locks it in and gets the submission win.

Highlights: Lesnar commands the pace early on, but both he and Reigns are thrown off when Braun Strowman shows up to cash in his Money In the Bank briefcase. Lesnar manages to snag the briefcase from Strowman, however, and hit him with it a few times. He throws the case up the ramp, but Reigns spears him before he can attack and gets the pin. He is the new universal champion.

SummerSlam 2018 has plenty of exciting matches scheduled on its fight card. There are the title matches, the most notable of which is between AJ Styles and Samoa Joe for the WWE Championship. There’s also the Raw Women’s Championship between Alexa Bliss and Ronda Rousey, which will payoff a months-long feud that dates back to Money In the Bank.

Another rivalry that will come to a head during SummerSlam 2018 is the one between WWE Universal Champion Brock Lesnar and challenger Roman Reigns. Lesnar will defend his title for the first time since April 27, and with him looking to compete in the UFC, we may see a shift in Reigns’ favor. Be sure to tune it at 7 p.m. EST to find out what happens.

In addition to these, Daniel Bryan will face his biggest singles match since making his return in April, as he faces longtime rival The Miz. Their story dates all the way back to 2010, when Bryan made his WWE debut. There’s also going to be a a major title match between AJ Styles and Samoa Joe, with the former defending his WWE Championship title. 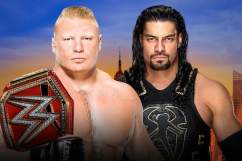