Getty Alabama has been unbeatable in opening games.

Alabama is favored by 24.5 points over Louisville in the latest point spread, per OddsShark. The point total is set at 62.5 in one of the marquee neutral site games of college football’s opening weekend. It may seem like a large point spread against a Louisville team with a pretty strong track record, but Nick Saban’s stellar history in openers likely impacted the line.

The Lamar Jackson era is over at Louisville, and the Cardinals are hoping new starting quarterback Jawon Pass is up for the challenge. Pass has only attempted 33 passes over his career, and faces a difficult challenge in making his debut as the starter against Alabama. Louisville coach Bobby Petrino appears to be confident in his team’s chances against Alabama.

“They’re a very good football team,” Petrino told Card Chronicle. “They’ve got a great tradition. We’re excited to play them. It’s a great challenge, and we know that. But I’m going to tell you this: If we can get where we have every single guy on our team, every single coach on our team, to believe like I believe — because I believe we’re gonna go beat ’em — so I need everybody else to believe that. And we will go beat ’em.”

Nick Saban Has Been Lethal in Alabama’s Season Openers

Petrino may be confident, but history is on Saban’s side. Alabama has won all 11 opening games during the Saban era. Not only has the Crimson Tide won, but every victory has been by double-digits. Last season, Alabama opened up against Florida State in a No.1 vs. No. 2 contest being dubbed as one of the biggest openers in college football history. Alabama dominated Florida State, and ended the Seminoles title chances. Over the last several years, Alabama has destroyed Wisconsin, Virginia Tech and Michigan in opening games.

This season, there is some skepticism over how much the quarterback controversy will impact the Crimson Tide. Regardless of who Alabama decides to lean on during the season, the offense is in capable hands with either Tua Tagovailoa or Jalen Hurts. Alabama did lose Calvin Ridley to the NFL, but the Crimson Tide have a trio of young receivers that are expected to step up in a major way.

Alabama vs. Louisville Pick Against the Spread

There is a reason Alabama is favored by nearly four touchdowns. For all of Louisville’s talent, it does not match up to Alabama’s depth. Louisville is committed to playing faster this season, which could lead to a lot of three-and-outs against a stout Alabama defense. Pass has a good college career ahead of him, but it is a lot to ask an inexperienced quarterback to debut against this high caliber of an opponent. Look for Alabama to cruise to victory as they cover the spread, but I like the under on the point total as Louisville struggles to score. 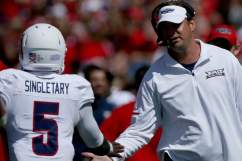 Read More
Alabama, College Football, Football, Louisville, Odds, Sports Betting
Alabama takes on Louisville in one of the major college football games of opening weekend. Check out the latest odds, and our pick against the spread.