Getty It was a good off-season for Matt Ryan thanks to his new $150 million contract.

Matt Ryan signed a new five-year, $150 million contract with the Falcons over the off-season. According to NFL.com, Ryan has at least $100 million in guaranteed money over the life of his new deal. Ryan’s new deal does not begin until the 2019 season. How much money will Ryan make in 2018? According to Spotrac, Ryan will make just $6 million in base salary this season, but also received a $23.5 million signing bonus.

Over the last year, five quarterbacks have claimed the mantle of top-paid passer in the NFL (in chronological order: Derek Carr, Matthew Stafford, Jimmy Garoppolo, Kirk Cousins, Ryan). I think it’s safe to call Ryan the most deserving of that title, as the only MVP winner or Super Bowl participant among the bunch. He is not often mentioned in the discussion of top-tier QBs, but Ryan leads the league in yards per attempt over the last three years, and over the last five seasons, he’s right there with Drew Brees, Ben Roethlisberger, and Russell Wilson in that category.

Ryan is coming off his worst statistical season since 2010. Ryan’s 4,095 passing yards is nearly 1,000 yards less than the previous season, and Ryan also threw 18 fewer touchdowns. The Falcons offense regressed under first-year offensive coordinator Steve Sarkisian. Ryan had a career season in 2016 on the Falcons Super Bowl run as he passed for 4,944 yards and 38 touchdowns. Falcons general manager Thomas Dimitroff explained why Atlanta decided to make the record-setting offer.

“This extension was our primary focus this offseason,” Dimitroff explained to the Atlanta Journal-Constitution. “Matt has been a pillar of stability for this franchise for a decade, and it is a great feeling knowing that he will remain at our helm for six more years. Matt has proven to be a leader for this franchise on and off the field, and we are fortunate to have him as our quarterback. Matt has guided us to a decade of success that is unmatched in franchise history, but we all know there is more to be accomplished, and we are confident we can get that done with Matt.” 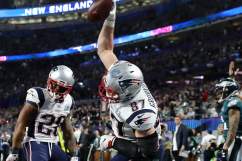 Read More
Atlanta Falcons, Football, Matt Ryan, NFL
How much money will Matt Ryan make in 2018? Find out all the details on Ryan's $150 million new contract, salary breakdown and more on the Falcons quarterback.