Ronald Schmidt is the boyfriend and coach of professional tennis player Anastasija Sevastova.

As Sevastova squares off for what might be the biggest match of her life-playing Serena Williams in the U.S. Open semifinal- Schmidt told The New York Times, “Anastasija’s story is kind of crazy.”

Schmidt and Sevastova have been together for four years. Here’s what you need to know.

1. Schmidt & Sevastova Met in 2013, Right After Sevastova Had Retired

In 2013, Sevastova retired at 23 years old, at a current ranking above the top 100. She and Schmidt then met at the Better Tennis Academy in Vienna, Austria. Both Schmidt and Sevastova were coaching there, and Sevastova eventually decided to take another shot at playing tennis.

Schmidt said of her decision, “She got very serious [one day], And she told me she wanted to try tennis again, to compete and see how far she could get.”

Schmidt added, “Look, it was not my intention to bring her back. I never said to her, ‘Let’s try again.’ It had to come from her, and it was important that she was the one who decided it, not anybody else. And she’s been great. She’s working hard and now she’s in the semis… it’s crazy to think where we were four years ago.”

2. Schmidt Is Austrian, & Sevastova Is Latvian

Schmidt and Sevastova have very different backgrounds: Schmidt is Austrian and Sevastova is from a small city in Latvia called Liepaja.

Sevastova explained to The New York Times that she learned tennis on red clay courts, and that she would have to play her winter tennis inside a school gymnasium, since there were no winter tennis courts in her city. She said, “Until age 14, I practiced in the school gyms on the wood. Riga has some good facilities with indoor clay and hard courts, but I was always in Liepaja. Indoors on wood is a different style of play because it was so fast, and there were lots of bad bounces.”

Schmidt apparently wears an “I HEART Liepaja” hat whenever Sevastova is playing in a match, even though it doesn’t really have a direct connection to Sevastova (besides Liepaja being her home city.)

Schmidt said of the superstition, “I bought it in a coffee shop. I started last year with it, and now I’m wearing on every singles match. It’s superstitious.”

4. In the Past, Sevastova Has Commented on Her Complicated Work-Love Relationship With Schmidt

To The New York Times in 2016, Sevastova said of her boyfriend and coach, “There are good days and bad days, but more good days. It’s complicated, but you have to see private away from tennis, and work that out. I think we are working that out pretty well.”

She added that the second stage of her career (as she emerged post-retirement at age 23) was easier as the result of her traveling time with Schmidt. She said, “Before I didn’t talk that much about my feelings and stuff. I’m not that open. But when I know that I trust the person, I think it has helped me a lot to talk, to open up a little bit more.”

5. Schmidt Gave Sevastova a Very Specific Piece of Advice Leading up to Her Match with Williams

Leading up to her much-hyped match with Williams in the semifinals, Schmidt told The New York Times that he told Sevastova to enjoy the moment, and to remember that “there really is no difference between a quarterfinal and a semifinal.”

He added, “You don’t get a trophy if you win the quarters or the semis, so it’s pretty much the same situation as against Sloane.” 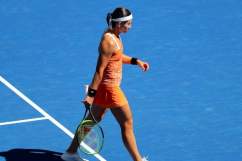