Chris Olave of the Ohio State Buckeyes had a standout performance against rival Michigan on Saturday, November 24. The Wolverines have not won in Columbus since 2000, and that streak continued in this game. Ohio State defeated Michigan 62-39.

THE BUCKEYES STRIKE FIRST.@OhioStateFB's Dwayne Haskins throws it outside to Olave for the tud ? pic.twitter.com/USQdHPwATa

Olave played a major role in getting the momentum going. Before halftime, the Buckeyes had scored three touchdowns in the Horseshoe. The freshman wide receiver scored two of them.

In the third quarter, Olave blocked a Wolverine punt which resulted in a touchdown for Ohio State.

HOLY BUCKEYE! Chris Olave is catapulting himself into #Buckeyes lore with the game a lifetime. 2 touchdowns and a blocked punt to set up another OSU TD. Ohio State 34-19 in the 3Q.

Prior to the Michigan game, Olave hadn’t stood out in a significant way. According to 247Sports.com, Olave had accumulated just 70 yards on five catches.

Olave was a late recruit to Ohio State. The southern California native received offers from several schools, and reportedly seriously considered playing at UCLA. But he committed to Ohio State in January of 2018.

Chris Olave was born and raised in southern California. He first attended Eastlake High School in the city of Chula Vista, which is a few miles southeast of downtown San Diego.

My first dunk ever ? pic.twitter.com/8VZ1h4lgVZ

2. Olave Made Up For Lost Time & Put Up Big Numbers During His Senior Year of High School

As explained by Eleven Warriors, Ohio State football does not typically do a lot of recruiting on the west coast. Chris Olave had to sit out his junior season after transferring schools, meaning Ohio State did not notice him until his senior season.

According to Olave’s bio on the team website, he scored 26 touchdowns while playing for Mission Hills. He caught 93 passes for 1,764 yards. Olave was ranked 54th on the list of top wide receivers nationwide, by 247Spsorts.com.

Ohio State made an offer to Olave during October 2017. 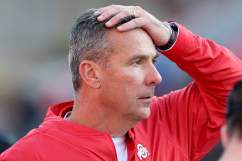 Chris Olave attracted a lot of attention in a very short time span. Just a few weeks into his senior year of high school, Olave was getting offers from multiple universities.

He had offers from schools including Michigan, Tennessee, USC, Utah and UCLA.

He narrowed his final two choices to Ohio State and UCLA.

4. Chris Olave Says He Saw a Sign That Ohio State Was the Right Choice Just One Day After Visiting Campus

Olave told the San Diego Tribune that his parents did not try to influence his college decision. But he saw a sign the day after returning home from Columbus, Ohio.

5. Olave Shows a Lot of Gratitude on Social Media

Happy birthday to the most unselfish, outgoing, hardest worker I know. So much stuff I can say about her. Mom, you’re the reason I go so hard. I love you w everything I got. ❤️ @causha_olave pic.twitter.com/ecRlwlW8DI

Chris Olave is the son of Raul and LaCausha Olave. In recent social media posts, he has shared his gratitude to them, and to God, for where he is in life.

On November 23, he wished his mom a happy birthday on social media with this touching message: “Happy birthday to the most unselfish, outgoing, hardest worker I know. So much stuff I can say about her. Mom, you’re the reason I go so hard. I love you w everything I got. ❤️ @causha_olave”

Thank you God for another day.

On November 17, Olave tweeted, “Thank you God for another day.”

Olave used to play with his older brother, Josh. Chris told Southern California Prep Insider during his senior year of high school that he was dedicating the season to Josh, because Josh had been unable to compete during his own senior season due to transfer rules. Josh now plays at Azusa Pacific University.

READ NEXT: Tammy Bullard: A Tribute to Auburn Superfan