As Shut Up and Dribble documented, former Chicago Bulls player Craig Hodges was ostracized for his outspoken political actions in 1991, when he wore a dashiki to the White House and handed President George H. Bush a letter that asked him to do more for poor people.

Hodges, 58, has continued to live and breath basketball, with his most recent stint being as head coach of the Rich East High School in Park Forest, Illinois. According to a release sent out by the school, Hodges stepped down for personal reasons in December 2017. “From a personal standpoint, it is time for me to take a different approach on how I am going to impact Rich East,” Hodges wrote. “The love I have for Rich East has not diminished at all.”

Jamaal Hodges, his son, has taken over as interim coach, but RRStar reports that Hodges still helps train the up-and-coming players. He is also the author of the book Longshot: The Triumphs and Struggles of an NBA Freedom Fighter, where he discusses the effect that being politically active had on his all-star career.

A premier shooter in the NBA, Hodges participated in eight straight three-point shooting competitions during All-Star Weekend, won three straight titles between 1990-92, and finished second twice. He still holds the contest record for most threes made in a round (21) and most made in a row (19). After the Bulls’ 1991 visit to the White House, however, and the subsequent controversy that Hodges’ actions incited, he was waived by the team. According to Chicago Mag, he did not receive a single offer from another team, and chose to attend the 1993 three-point competition wearing a generic “NBA” jersey.

Hodges Says He Was Blackballed for Being Politically Outspoken

Hodges told Chicago Mag that he was ostracized because of the influence he had over the youth. “It’s speculation, because nobody will tell me,” he explained. “I think it’s the ability to articulate your position, and you’re a leader, and the platform that you have to speak from is enormous. So those people who control things don’t want you to have that pull and want to deny you the ability to make a difference, because you might be able to.”

In 1996, Hodges filed a $40 million lawsuit against the NBA and its then 29 teams, claiming they blackballed him for his association with Louis Farrakhan and criticism of “African-American professional athletes who failed to use their considerable wealth and influence to assist the poor and disenfranchised.” He continued to play internationally until 1998, when he turned to coaching.

Hodges Has Spoken Highly of Colin Kaepernick & His Boycott

In 2017, Hodges spoke on the differences he faced versus the recent controversy surrounding NFL player Colin Kaepernick. “Today, on social media, people can vibe with you even if they can’t do anything about your opportunity to play,” he told the Guardian. “So I feel good he knows people support him. Now, if the NFL doesn’t stump up and he doesn’t get an opportunity, fans who are supportive of Colin should show their displeasure and stage a boycott. Don’t buy jerseys or don’t go to the game to show appreciation for his stance.”

Hodges currently resides in his hometown of Park Forest with his wife Allison. He has three sons: the aforementioned Jamaal Hodges, who coaches at Rich East High School; Jibril Hodges, who played basketball at Long Beach State, and Jordan Hodges, a rapper and boxer with TMT. 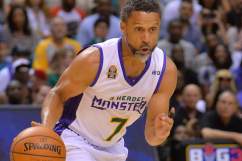 ‘Shut Up and Dribble’: Where Is Mahmoud Abdul-Rauf Now?