Getty Darrell "Bubba" Wallace pictured with girlfriend Amanda Carter prior to the 2018 Daytona 500.

Darrell “Bubba” Wallace does not have a wife but has been in a long-term relationship with girlfriend Amanda Carter. As Wallace competes on tracks around the country, Carter can be found frequently cheering him on. Both are active on social media, and Carter enjoys poking fun at her NASCAR boyfriend who does not appear to take himself too seriously.

This includes Carter making fun of Wallace’s affinity for daiquiris.

“Never met a ‘man’ who loves daiquiris so much ?? lost count on how many this is… we’ve been here 2.5 days,” Carter posted.

The couple went on a Hawaiin vacation during the NASCAR offseason and enjoyed snorkeling when Wallace was not drinking daiquiris.

Never met a “man” who loves daiquiris so much ?? lost count on how many this is… we’ve been here 2.5 days pic.twitter.com/5UIoZ74uGa

Wallace and Carter live in Charlotte where sheis a senior financial advisor at Bank of America. Wallace recently purchased a house with three acres just minutes from where he grew up.

“I love where I live. It’s fifteen minutes, if that, from where
I grew up,” Wallace noted to Garden & Gun. “I just moved into a house back in May with three acres. I was itching to get on my own property and do what I want. It’s peaceful. A typical off day for me, I’m hanging out at the house. I have a garage being built here in a little bit. I’ll be getting some more old classic cars. Right now I have a 1951 Chevy 3100 pickup. That’s a lot of fun—we’re still working on it a little bit, to get it back on the road.”

Amanda Was a Finance & Banking Student at Appalachian State

Two of the many things Charlotte is known for are NASCAR and a hub for the banking industry, making it a good fit for the couple. Prior to working at Bank of America, Carter was a finance and banking student at Appalachian State. Carter was part of a Financial Analyst Program at Bank of America which she finished in May 2018, per LinkedIn.

My second year as a MAP was spent working on the Enterprise Cost Management Team. Our team worked to provide E2E cost transparency to the bank’s LOB and support groups to help achieve optimization and operational efficiency through our integrated activity based approach.

Wallace enjoys giving fans a glimpse into their lives by posting photos of the couple. He explained why their relationship worked back in a 2018 Instagram post.

“GF overload.. crazy how the unexpected turns out! Our love is so strong that ya wouldn’t know we’re polar opposites???‍♂️. Thanks for balancing me out the last 2 years!?,” Wallace posted on Instagram.

As the first African-American NASCAR driver to have a full-time ride since 1971, Wallace has been outspoken about his desire to grow the sport.

“I’ve been going to the racetrack for a while, and I’ve been accepted,” Wallace explained to Garden & Gun. “I haven’t had any issues, but I have heard stories of what Wendell Scott [one of the first African American drivers, who began racing in the fifties] went through, and it’s crazy to see how much things have changed since then. The fan base—listening to the driver introductions, you get a good amount of cheers when your name is called, no matter where you qualify or how bad of a day you’re running.” 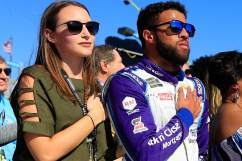 Read More
Auto Racing, NASCAR
Darrell "Bubba" Wallace does not have a wife but is in a serious relationship. Learn more about Wallace's girlfriend Amanda Carter and life away from racing.