Free safety Devin McCourty and his twin brother, cornerback Jason McCourty, are getting ready, along with the rest of the New England Patriots, to take on the Los Angeles Rams in Super Bowl LIII. The McCourty brothers will be playing in the big game together for the first time. The McCourty twins are the first set of twins to play in a Super Bowl — ever.

Jason McCourty, drafted by the Tennessee Titans in 2009, is making his first Super Bowl appearance, having been traded to New England by the Cleveland Browns in the 2018 offseason. Devin McCourty, drafted in the first round, 27th overall, by the Patriots in 2010, is playing in his fifth Super Bowl, and owns a set of championship rings courtesy of the teams win in XLIX and LI.

Welcome to the SUP!

Although Devin is pretty much a Super Bowl pro, Jason has never played on football’s biggest stage. In fact, he would often find himself having “professional envy” when his brother and his team would make it to the Super Bowl and he attended as his brother’s guest.

That’s not happening this year, however, as Jason has his very own ticket.

“I’m not used to this!” Jason told a Patriots staff member after winning the AFC Championship.

‪Living a dream! Blessing to be able to play a full regular season next to my dog! More to come…‬(J-Mac)

It’s true that Devin and Jason McCourty share more than just a birthday. In fact, the brothers — who were born just 27 minutes apart (Devin is older) — have shared an Instagram account since joining the social media platform.

Devin and Jason McCourty also have a joint YouTube Channel called “Double Coverage,” a play on football and their twin status. The guys have a lot of fun interacting with one another and are pretty entertaining to watch. Their latest video titled “Super Bowl Logistics” was uploaded a few days ago. You can check it out below.

3. They Are Both Married With Kids

Yea let’s all force 5 kids to take a group picture together in our pjs that should be fun! Merry Christmas from the McCourty’s!

Devin and Jason have a lot to be thankful for. They have both found love and both have adorable families that seem to keep on growing.

Devin married his wife, Michelle, two years ago after they got engaged at Disney World. On April 30, 2016, Michelle, a doctor, and Devin exchanged vows in front of their family and friends at the Venetian in New Jersey. The couple welcomed their daughter, Londyn, in 2017, and their son, Brayden, last April.

Jason and his wife, Melissa, got married on April 12, 2014. They are parents of three children, Liana, 5, Kaiden, 2, and Kai, 1. Melissa is beyond excited to see her husband make it to Super Bowl LIII and expressed such on Instagram. 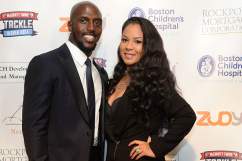 4. They Both Went to Rutgers

Devin and Jason McCourty have been playing football together since they were young. In fact, their mom, Phyllis Harrell, chatted with NFL.com after the AFC Championship to recall some of her earliest memories of her boys on the field together.

“It took me back to when they played Pop Warner, when it was just fun. That’s what it looked like they were doing at the end of the championship game. It brought back so many memories. That first year they played, they stayed at my mother’s house the night before. They were up half the night. The next day to go to practice, they didn’t want to go because they were tired. I said, ‘After this season, if you don’t want to play you don’t have to. But you have to finish up this season,'” Harrell recalled.

As the two got older, Harrell had hoped they would go to college together — and while it all worked out in the end, it almost didn’t happen. Jason wanted to go to Boston College and Devin wanted to go to Rutgers.

“To get Jason, Rutgers offered Devin a scholarship,” NFL.com reported, and the rest was pretty much history. Sort of. While Rutgers went to bowl games every season that Devin and Jason played, their future careers were looming.

Jason ended up getting drafted a year before Devin. Jason was drafted by the Tennessee Titans in 2009. Devin was drafted by the Patriots in 2010. In April 2017, Jason was released by the Titans after eight seasons. He signed a two-year deal with the Browns and was traded to New England one year into his contract. When he got the opportunity to join the Patriots, it was like everything came full circle.

“Two McCourtys are better than one,” Devin says he wrote in a text to Bill Belichick at the time.

5. They Switched Places on Draft Day

Sets of twins have a natural advantage when it comes to shenanigans, with the ability to switch places with each other. It turns out Devin and Jason McCourty did that very thing on the biggest day of his football career, but out of necessity.

After the Patriots drafted Devin McCourty in the first round, team owner Robert Kraft called to welcome him aboard. But, as it turns out, he was in the bathroom, a situation that pressed Jason McCourty into service pretending to be his brother, according to USA Today’s Patriots Wire.

“I had to answer the first part of the conversation talking to Mr. Kraft and being excited about getting drafted by the New England Patriots. The second half, Dev talked to coach [Bill] Belichick. So that was probably the best [prank] we’ve done so far, and it wasn’t even on purpose. Even now, we’re continuing to prank by just walking in the door. People don’t know who’s who,” Jason McCourty revealed after an August 2018 practice.

Jason McCourty continued, saying that the twin brother’s own wives have a difficult time telling them apart, so he doubted anyone knew the difference during their unintended draft day switch.

“Bill still doesn’t know. If it was up to Bill, we’d walk around with our jerseys on all day,” Devin told USA Today earlier this week.