Getty Jared Goff does not have a wife, but has been linked to model Christen Harper.

Jared Goff does not have a wife, but has been linked to rumored girlfriend Christen Harper. Since Goff entered the league he was believed to be single, but news broke during the playoffs that Goff had been seeing Harper. Neither Goff or Harper has confirmed they are dating, but there is evidence that the two are an item. Sports Gossip reported on January 18th that Goff and Harper are dating.

Jared is hiding her from everyone except some friends. She was at the game last weekend but sat with the Whitworth clan and not his family and friends from home.

The couple was spotted together at a Halloween party, and Harper has reportedly attended some of the Rams games as well. Prior to the season, Goff conducted an interview with ESPN where he noted he was single.

During the same interview, Goff admitted to having a celebrity crush on Jennifer Anniston and cited meeting Taylor Swift as one of his best moments since becoming an NFL quarterback.

If you could take an Uber Pool with any female celebrity, who would you pick?
Jennifer Aniston. She’s an all-timer. I’d probably freeze up and just let her talk the whole time.
Who’s the coolest celebrity you’ve met here?
Probably Taylor Swift. I got hooked up backstage at her Rose Bowl concert. I was with my sister, mom and grandma. I’m a big fan.
Your sister sold you out recently: You like cheesy pop music?
She’s not wrong. Every once in a while, you gotta put on some Katy Perry or Taylor Swift.

Harper Is a Model Who Has Appeared in the Films The Obituary of Tunde Johnson & Auggie, Which Are Both in Post-Production

Harper is both an actress and model. According to IMDb, Harper’s two most recent works are still in post-production. Harper appears in the sci-fi movie Augie with Richard Kind. Here’s an overview of the film, per IMDb.

Forced into early retirement, Felix Greystone falls in love with an augmented reality companion, to the detriment of his relationship with his wife and daughter.

The Obituary of Tunde Johnson is a drama that deals with police brutality, per IMDb.

The gripping and emotional drama tells the surreal tale of a wealthy, black, high school senior who falls victim to an endless time loop of police brutality.

While Goff has remained quiet about his relationship status, his roommate works on The Ryan Seacrest Show. While he refused to answer personal questions about Goff’s personal life, he did admit to following Harper on Instagram when Secrest pressed him about the rumors. Goff’s roommate did not give any details about his good friend, but the tone of his responses added fuel to the Harper-Goff rumors. 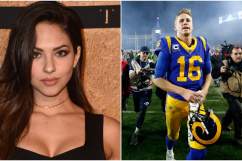