Getty Markelle Fultz gets a fresh start in Orlando.

Markelle Fultz is headed to the Orlando Magic, but the question is when he will return to the court as he continues to recover from an injury. The Sixers announced on December 4th that Fultz had thoracic outlet syndrome which specifically impacts the shoulders. Here’s how Web MD describes the condition.

The thoracic outlet is the narrow space between your collarbone and top rib. Muscles run through it from your neck to your shoulder, along with the nerves and blood vessels that go down your arm.

Since news broke that the Magic traded for Fultz, multiple reports have indicated the Orlando front office plans to exercise caution with Fultz. Real GM’s Keith Smith noted the Magic could opt to sit Fultz for the remainder of the season.

“Source: Orlando will exercise patience with Markelle Fultz’s return to play. The Magic are taking the long-view with Fultz potentially being the starting guard to pair with the rest of their young core. Don’t be surprised if Fultz doesn’t return to play this season,” Smith tweeted.

The Magic Plan to Exercise Caution With Fultz

Fultz’s agent told ESPN on Christmas Day that the point guard would return this season. Fultz has not played since November 19th, and it remains to be seen when the former No. 1 pick will hit the floor again.

Fultz’s agent, Raymond Brothers, had told ESPN on Christmas Day that his client is progressing well in rehabilitation on his right shoulder and that he expects Fultz to return to the team this season.

“We want to make sure he’s 100 percent and healthy when he does come back,” Brothers said.

The Athletic reported in November that Fultz was dealing with a wrist injury in addition to his shoulder. This report came prior to the Sixers press release linking Fultz to thoracic outlet syndrome.

In addition to a previously diagnosed right shoulder injury that continues to impact him, Fultz has been playing with an apparent injury in his right wrist area that has adversely affected his ability to shoot, league sources told The Athletic. The issue has led to periodic difficulties holding on to the ball during his shot. Specialists have been working with Fultz to figure out how they can strengthen the wrist area to remedy the injury.

Sources with knowledge of Fultz’s thinking have also told The Athletic that the player would prefer a fresh start with a new team.

With Markelle, obviously, he had one of the most documented case of kind of the yips of basketball in recent years,” Hanlen said, “where he completely forgot how to shoot and had multiple hitches in his shot…For me, it was hey listen ‘how can I get this kid that was No. 1 in last year’s draft back rolling and get him to the point where he was before, or if not better?’ We’ve been working hard everyday, working on rewiring his body and getting kind of a smooth stroke back in his shot. We’re way ahead of pace where I thought we were gonna be. I thought it was gonna take me at least six weeks before we had kind of a serviceable jump shot. We already started to shoot with a jump in Week 2. 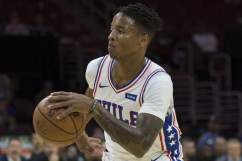