Getty Despite suffering a knee injury, Zion Williamson is still the favorite to be the No. 1 pick in the 2019 NBA draft.

Zion Williamson’s injury does little to change his standing in our latest NBA mock draft. Williamson will miss some time with a knee injury that looked a lot worse, but the big man is expected back soon as Duke makes their run towards March Madness.

Williamson’s injury has ignited a debate that has been growing throughout the college basketball season. Several NBA players and analysts are advising Williams to sit out the rest of the season. Barring a career-ending injury, it is hard to imagine anything pushing Williamson off the No. 1 spot when June’s draft rolls around. This is why I wrote it is okay for Williamson to continue playing for Duke if that is what he wants to do.

The debate is sure to carry on as March Madness rolls around, but the only opinion that really matters is Williamson’s. Earlier this season, the Duke big man addressed why he does not plan to sit out, and it appears nothing has changed.

The NBA Is Heading Towards High Schoolers Entering the Draft

All this will no longer be a discussion in a few years as the NBA is moving towards allowing high school players to once again enter the draft. The current rules state a player must be one year removed from high school before they are eligbile to play in the NBA. This is why we see players like Williamson playing college basketball this season.

USA Today reported the NBA is formally reviewing the age limit after months of rumors that it could be changed. The amendment would still have to be approved and the soonest it would take effect would be 2022. USA Today described the latest developments.

The NBA has submitted to the National Basketball Players Association a formal proposal that will lower the draft-eligible age to 18 from 19, a person with knowledge of the proposal told USA TODAY Sports.

The person requested anonymity because he was not authorized to publicly discuss discussions between the league and the union.

The NBPA and its executive director, Michele Roberts, planned to review the proposal Monday at a post-All-Star weekend meeting in the Bahamas…

This is the first step in formal negotiations to lower the age limit by the 2022 draft. The issue is collectively bargained between the NBA and NBPA, and both sides need to agree to any rule change.

For now, the NBA will operate under the current rule, but this could make 2022 draft picks immensely valuable because it would feature one-and-done players along with top high school prospects.

Here’s a look at our latest NBA mock draft. The order is based on the February 23rd standings, per Tankathon. 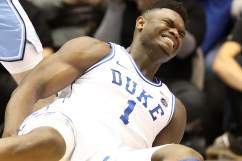 Zion Williamson Has Been Hijacked