Getty After a nearly 20 year hiatus, the XFL is launching again in 2020.

The AAF (Alliance of American Football) is off to a good start, but things will get more challenging in 2020 when the XFL launches. Like the AAF, the XFL is looking to fill the football void that is left once the Super Bowl ends and the NFL offseason officially begins.

It remains to be seen whether there is enough interest to support not one but two developmental football leagues. One of the positives that have come out of the launch of the AAF has been the quality of play. The question is whether there is enough talent not currently playing in the NFL to support both leagues. The launch of the XFL calls into question whether either league will be able to offer the same level of football when the number of combined AAF and XFL teams double after just one season.

As the AAF and XFL begin competing against each other in 2020, the irony is that AAF co-founder Charlie Ebersol got the idea for the league after he made a documentary about the XFL for ESPN. Ebersol’s father, Dick Ebersol, was part of the XFL’s launch as an NBC television executive.

“I remember being on the sidelines and thinking ‘this is incredible,'” Charlie Ebersol told CBS Sports. “When I started to dig back into that a couple of years ago to do the film, I started seeing how the potential was never met in terms of what you could do with football. You had lots of people show up. They just showed up to bad products. So if you really focused on having a good product, there’d be something there.”

Like the AAF, the XFL will start with eight teams: Dallas, Houston, Los Angeles, New York, St. Louis, Seattle, Tampa Bay and Washington D.C. Only one of these eight cities are without an NFL team. The AAF has six teams in unique markets: Orlando, Birmingham, Memphis, San Antonio, San Diego and Salt Lake City. Arizona and Atlanta both play in a region with an NFL team.

Little is known about the XFL, but here is what we know about the league’s vision heading into 2020.

The XFL Is Hoping to Be a Quarterback Driven League, While the AAF Has Focused on Coaches

The AAF has had a relatively successful start despite having quarterbacks that are far from household names. With the exception of Christian Hackenberg, the majority of AAF starting quarterbacks are a relative unknown.

The XFL is planning to attract top-level quarterbacks and begin marketing them for next season. The XFL’s strategy appears to be offering these quarterbacks more money than the AAF. According to XFL 2K, the quarterbacks are expected to be offered a $300,000 salary which is more than an AAF quarterback will make over the three-year life of their $250,000 contract.

Coaches for the XFL teams are currently being interviewed, with $500,000/year being the expected pay. Quarterbacks are reportedly being offered $300,000. The current idea is to have eight star quarterbacks signed by March so that they can start marketing the coaches and the quarterbacks to the local markets.

The AAF has instead chosen to focus their funds on attracting coaches like Steve Spurrier. According to Sporting News, the AAF coaches salary is an estimated $500,000. It is worth noting this is the same amount the XFL is reportedly offering and former Oklahoma coach Bob Stoops has already been hired to lead the Dallas franchise.

The XFL Wants to Shed Its Perception as a Gimmick League

The initial XFL campaign lasted just one season in 2001. There are a variety of factors that went into the XFL’s failure, but one key reason is the league tried to fight a losing battle by competing with the NFL. This time around, the XFL appears to be taking a similar approach as the AAF in that it wants to complement the NFL.

The old XFL emphasized gimmicks and marketing to drum up interest. The XFL now wants to be known for playing quality football. Given the presence of the AAF, the XFL will have to find ways to differentiate itself as a unique league. The XFL is expected to experiment with a few rule changes and one idea mentioned is the league could have a running clock. Instead of the clock stopping when a player goes out of bounds or after an incomplete pass, the clock would continue to run in an effort to shorten games.

One advantage that the XFL has over the AAF is a large bankroll. According to XFL2K, Vince McMahon plans to put $500 million into the new league. The AAF is hoping its partnership with the NFL can help make up some of the financial difference.

The key to the XFL’s success depends on what kind of television and streaming deal the league is able to get. An agreement with a network like ESPN would add to the XFL’s exposure and marketing. 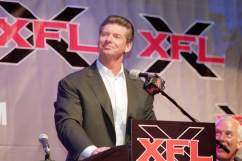