Buddy Boeheim, whose birth name is Jackson, plays guard on the Syracuse basketball team and is the son of head coach Jim Boeheim.

Jim Boeheim and his wife Juli have three children together and all three of them went on to play collegiate basketball. Buddy’s older brother, Jimmy, chose to play at Cornell. But Buddy made the decision to play for his father at Syracuse. His twin sister, Jamie, is a forward at the University of Rochester.

Here’s what you need to know about Buddy Boeheim.

1. Buddy Boeheim Said Approximately 10 Colleges Reached Out to Him About Joining Their Teams, But That Playing For His Father Was ‘Everything’ to Him

Buddy Boeheim had his pick of colleges. According to 247Sports, Boeheim was ranked the 9th best recruit in New Hampshire and the 77th best shooting guard nationwide.

Boeheim said he had about 10 schools express interest in him joining their teams. The teams that reportedly gave him offers included Gonzaga, Binghamton, Iona College, and Massachusetts.

But in a video revealing his decision, embedded above, Boeheim laid out his reasons for why Syracuse had always been his top choice. “I want to live up to my dad’s passion for the game. I want to play in front of 30,000 screaming fans every home game. I want to win a national championship. To play for my dad would mean everything to me.”

2. Boeheim Was Named All-Central New York Large School Player of the Year His Junior Year of High School & Transferred to a Prep School For His Senior Season

Everyone come out to the first home game tomorrow vs Grimes @7:30!! #Spooky

Buddy Boeheim, who is 6’5″ tall, was a force to be reckoned with even as a younger player. According to his bio page on the Syracuse sports website, Boeheim was named the 2017 All-Central New York Large School Player of the Year, during his junior season at Jamesville-DeWitt High School. He averaged more than 26 points and nearly 10 rebounds that season.

But Boeheim decided to switch it up for his senior year of high school. He chose to attend Brewster Academy, a boarding school in Wolfeboro, New Hampshire. The academy, according to PrepCircuit.com, consistently graduates players that end up playing for some of the best college basketball programs in the country.

3. Jim Boeheim: Buddy Was the ‘One in the Family Who Always Wanted to Play Basketball’

Buddy Boeheim and his siblings grew up surrounded by basketball and all things Syracuse. His father, Jim Boeheim, began his coaching career there as an assistant in 1969 before being promoted to head coach in 1976.

Buddy allegedly was the kid with the most passion for the game. He and his parents appeared in a documentary called “Building the Boeheim Bond” as he prepared to begin playing at Syracuse. His mother, Juli Boeheim, explained that as a child, Buddy would become tearfully emotional after Syracuse would lose.

Jim Boeheim said Buddy “started picking up a basketball when he was a baby.” And even though all three of Jim and Juli’s children play at the college level, Jim stated that Buddy was the “one in the family who always wanted to play basketball.”

Buddy said that their shared love of basketball has always been a bonding force between him and his father. In the video, Jim reiterated that when Buddy came to play at Syracuse, they would have two separate relationships. Off the court, Jim is Buddy’s dad. But on the court, Buddy is just another player and Jim is the coach. They both say there is no special treatment.

4. Buddy Boeheim Appears to Have a Close Relationship With His Siblings

Over everything ❤️? #history

Buddy Boeheim has some sibling competition on the court. Older brother Jimmy plays at Cornell and the two faced off on December 1, 2018, for the first time. Syracuse won 63 to 55 in the game that was nicknamed “Battle of the Boeheims.”

But the Boeheim siblings appear to have a close relationship, even if there is a rivalry on the court. Buddy’s sister, Jamie, is his twin. She plays forward at the University of Rochester.

Happy birthday to these two! Proud of you guys ❤️

Jimmy Boeheim shared the above photo to Instagram on November 11, 2018, which is Jamie and Buddy’s birthday. He wrote in the caption, “Proud of you guys ❤️.” Buddy and Jamie both responded with “love you.”

The trio also has an older sister named Elizabeth, whom their father shares with his first wife, Elaine. According to the Democrat & Chronicle, Elizabeth lives in Montana.

5. Buddy Boeheim Put Up Consistent Stats in His Freshman Season at Syracuse

GettyBuddy Boeheim #35 of the Syracuse Orange shoots the ball over Jordan Nwora #33 of the Louisville Cardinals on February 20, 2019. Syracuse defeated Louisville 69-49.

Buddy Boeheim proved during his freshman season that his spot on the team was earned, not because of who his father is. He put up career-best numbers on March 13, 2019, during an ACC Tournament game against Pittsburgh.

Boeheim scored 20 points in his 36 minutes of play, shooting 46 percent from the field. 15 of those points came in the second half. Boeheim had 6 rebounds, 4 assists, and made 5 of 7 free throws. The Orange, which had been down by six at halftime, went on to win the game 73 to 59.

Syracuse.com spoke with Boeheim after the game about the emotion he showed on the court after sinking a three-point shot. “It was just a great moment hearing all the fans in there and the support we got. I just wanted to show a little emotion. Especially in a game like that. It’s a big game for us. Just showing emotion is part of it and having fun out there.”

Off the court, Boeheim is majoring in sports management. 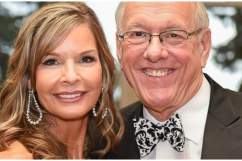