They have been married for more than two decades and have three children together, all of whom play collegiate basketball.

Here’s what you need to know about Juli Boeheim:

Juli and Jim Boeheim may spend most of their time on a basketball court, but they met while enjoying horse racing. They were introduced in 1994 at a party at the Kentucky Derby in Lexington. Juli was born in Miami, Florida, on March 5, 1966, but grew up in Kentucky.

Juli Greene Boeheim explained to Sports Illustrated in 1996 that she and Jim began talking after playing a game of backgammon at the party. The magazine described Juli as a young woman who looked like a “beauty queen” and asked what she saw in Jim, who is more than two decades older than she is. Juli responded, “I saw someone who is bright and funny and well-read and mature and realistic. But I see someone who can be playful, too.”

2. All 3 of Their Children Have Played College Basketball

Juli and Jim Boeheim have three college-age children together. And all three of them have played college basketball at the collegiate level.

Older son Jimmy played forward at Cornell University. According to his roster bio, Jimmy had a 43% shooting percentage during his junior season and started in 19 games. He didn’t get to compete his senior season because the Ivy League canceled its winter sports seasons due to the coronavirus pandemic, as the Ithaca Voice reported.

Jackson chose to stay at Syracuse and play for his father. He plays guard and was named first-team All-ACC Tournament during the 2020-2021 season, as noted on his roster profile. He is majoring in sports management.

Jackson’s twin sister, Jamie, played forward at the University of Rochester during her freshman season and played in 21 games. She served as the team manager during the 2019-2020 season, according to the school’s athletics website.

Juli told the Rochester Democrat and Chronicle that she keeps track of all of her kid’s schedules by posting them to the refrigerator; she joked that she checks the fridge before checking her personal calendar. She also shared the kids’ nicknames: Jimmy is JJ, Jamie is Sissy and Jackson is Buddy.

During the 2020-2021 season, oldest son Jimmy told Syracuse.com he ended up watching a lot of basketball after his own season at Cornell was canceled. But he told the website he couldn’t watch games with his mother because of her intensity. “I can’t watch the games in the same room with her. She’s yelling and going crazy. I’m a calm, take-it-all-in type of guy.”

That dedication on behalf of Syracuse continued even when her sons matched up against each other. Juli and Jim’s sons, Jimmy and Jackson, played against each other on December 1, 2018. Juli wore a special t-shirt for the event, which was called the “Battle of the Boeheims.”

As referenced above, Jimmy played for Cornell and Jackson was a freshman at Syracuse at the time. Julie told Syracuse Sports that it was a blessing to be able to watch both sons at the same time but admitted it was also stressful. She said that she hoped “both of my boys score 50 and Syracuse wins. That’d be a great night.” Syracuse did end up winning 63 to 55.

4. Juli Has a Positive Relationship With Jim’s Ex-Wife, Elaine

Juli Boeheim moved to Syracuse in 1995 after she began dating Jim. According to a Sports Illustrated profile the following year, there was never any bad blood between Juli and Elaine, his ex-wife.

The article included how Elaine was fine with her daughter, Elizabeth, spending time with Juli. She described Juli as a “wonderful person” and the two would even sit near each other at Syracuse basketball games.

Juli and Jim also run a foundation. The website lists its mission statement as such: “The Jim and Juli Boeheim Foundation strives to enrich the lives of kids in need within our Central New York community, as well as, provide support for eliminating cancer through research and advocacy.”

Their events include an annual gala called the Basket Ball and a Golf Classic. They also run a Fantasy Camp for adults, in which participants get to play basketball as if they were on the Syracuse team. 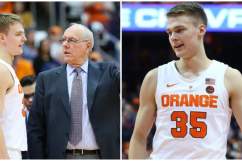