Getty Jon Rahm has been wearing a yellow ribbon on his hat.

Jon Rahm has been wearing a yellow ribbon on his hat during The Players Championship causing many fans to wonder about its meaning. The gesture dates back to the 2018 Ryder Cup when members of the European team started wearing the ribbons to honor Celia Barquin Arozamena. The former Iowa State golfer was originally from Spain and was murdered on a golf course.

Rahm has not publicly commented on the ribbon since the Ryder Cup, but it is believed that the golfer continues to wear it for the same reason. After the Ryder Cup, Rahm posted the following message on Instagram.

“It is a great privilege to represent Europe this week and to honor Celia Barquin’s memory in my first @therydercup @rydercupteameurope #vamos,” Rahm posted on September 26, 2018.

European captain Thomas Bjorn spoke about the decision prior to the Ryder Cup and noted Rahm knew the golfer.

“Such a great prospect for the game of golf, she was, but also a wonderful person,” Bjorn told the USA Today. “And when you speak to Sergio and Jon (Rahm) about it, they will both — they couldn’t talk highly enough about her. We felt like that was appropriate for the week.”

According to the AP, Arozamena was working toward joining the pro tour and was finishing her civil engineering degree at Iowa State. The AP reported she was stabbed on a golf course and her body was found in a pond.

Collin Daniel Richards, a 22-year-old with a history of violence, was arrested and charged with first-degree murder. Investigators said Richards had told an acquaintance he had “an urge to rape and kill a woman” and that he was living in a homeless encampment near the golf course in Ames, about 30 miles (50 kilometers) north of Des Moines.

Police said they recovered a knife and bloody clothing linked to Richards, who completed a prison sentence in June and has prior convictions for burglary and harassment.

According to Golf.com, Aronzamena took time each day to write handwritten notes to encourage teammates or others in need. Friends would find her notes in their backpacks or a random book.

“I have never known anyone who gave so much of themself to so many people,” Iowa State coach Christie Martens told Golf.com. “It wasn’t just the kind gestures she always did but also the energy she put out into the world.”

The late golfer shared a similar path with Rahm, a fellow Spaniard. Aronzamena grew up in Puente San Miguel, Spain prior to coming to the United States to pursue golf. She helped the Cyclones win the 2018 Big 12 championship and was named to the first-team All-Big 12. Golf Week ranked her No. 69 nationally, and she was named the Iowa State Female Athlete of the Year, per her Cyclones athletics bio. 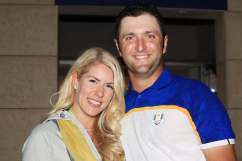