Getty The race for Zion Williamson will be determined at the NBA draft lottery.

The top NBA draft lottery odds are locked in and our latest mock draft reflects the updated order. The Knicks, Cavs and Suns all have the best chance to land the No. 1 pick at 14 percent, per Tankathon. The NBA draft lottery takes place on Tuesday, May 14th.

While the three teams all have the best odds, landing Zion Williamson is far from a sure thing. Next month’s lottery will determine the final draft order, and our mock draft is based on the odds. The Bulls and Hawks round out the top five in the lottery odds. Thanks to the Luka Doncic trade, Atlanta will also get the Mavericks’ pick if it falls outside the top-five.

It has been a difficult few weeks for the Lakers, but fans hoping to right the ship with Williamson may be disappointed. The Lakers have just a one percent chance of winning the No. 1 pick.

The order has yet to be determined, but three players have emerged as the top three picks. Williamson is a heavy favorite to be the No. 1 pick. Murray State’s Ja Morant and Duke guard RJ Barrett are fighting to be the No. 2 pick after the big man. We have Morant above Barrett thanks to his playmaking ability, but it is a close race between the two players.

It is wide open after the top three prospects. Right now, we give the edge to De’Andre Hunter after his performance in the NCAA championship game. Hunter posted 27 points and nine rebounds against Texas Tech in the title game. Be sure to check out our two-round mock draft if you are interested in seeing every projected pick.

The following mock draft order is based on the standings, per Tankathon. 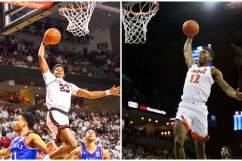