As much as teams try not to overreact to March Madness, it does impact players’ stock and our NBA mock draft tries to take this into account. Our latest mock draft features two rounds with the projected top 60 prospects.

The Elite Eight gifted us with matchups full of NBA prospects, but the Final Four does not have quite the same talent. As Duke, North Carolina and Gonzaga can all attest, having future NBA players does not necessarily lead to an NCAA title. Duke may be perhaps the most surprising given they potentially had three of the first five picks in the upcoming draft. The challenge is Duke lacked shooting and the offense appeared clunky during large stretches of the NCAA tournament.

Texas Tech’s Jarrett Culver and Virginia’s De’Andre Hunter are the two top prospects in the Final Four. Both players have the potential to be top-five picks, but there are also question marks about their games.

Culver is a guard whose long-range shooting needs improvement as his 31.6 percent is down nearly seven percentage points from last season. Hunter’s shot has improved, but it would be nice to see him take over games more. Hunter’s defense and shooting are two things NBA teams covet. That said, it is unclear how high Hunter’s ceiling is and whether the Virginia wing has star potential.

The following draft order is based on the NBA standings as of Friday, April 5th as well as future pick obligations, courtesy of Tankathon. Here is a look at my latest NBA mock draft. 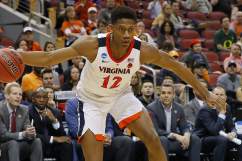